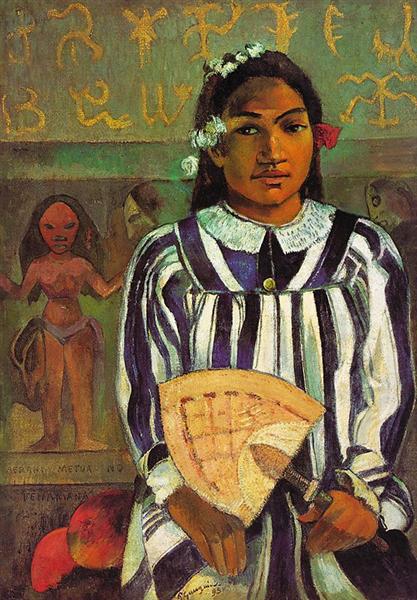 Merahi metua no Tehamana (English Tehamana Has Many Parents or The Ancestors of Tehamana) is an 1893 painting by the French artist Paul Gauguin, currently in the collection of the Art Institute of Chicago. The painting is a portrait of Paul Gauguin's native wife Teha'amana during his first visit to Tahiti in 1891-1893. This marriage has always provoked controversy because of the manner it was contracted and Teha'amana's age: the marriage was arranged and completed in the course of a single afternoon and Gauguin claimed Teha'amana was just thirteen years old at the time.

A sculpted head is also known to be a portrait of Teha'amana. She is assumed to have posed for numerous other paintings of the time, including the celebrated Spirit of the Dead Watching.

Teha'amana was the native wife of Paul Gauguin during his first visit to Tahiti in 1891 to 1893. It was extremely common at that time for French colonists to take native wives; the wives simply referred to as vahine, Tahitian for "woman". These vahines were often very young, as was the case with Teha'amana, their marriage being arranged by their family for reasons of status or financial advantage. The daughters involved usually entered such marriages willingly, the marriages generally being non-binding and the girl free to return home at any time. Indeed, of Gauguin's three vahines, the two he took after Teha'amana did eventually return home while Teha'aman herself declined to continue their relationship when Gauguin returned to Tahiti in 1895. Teha'amana undoubtedly saw herself as conventionally married according to her local customs, but for Gauguin the marriage was clearly a temporary arrangement. Nevertheless he did profess a tender love for Teha'amana in his journal Noa Noa (ca). Pierre Loti's Le Mariage de Loti, a book that influenced Gaugin's decision to travel to Tahiti, was an immensely popular account of such a marriage twenty years earlier, although in that case the marriage was actually a fictional composite of many casual liaisons indulged by Loti during a two-month visit to Papeete. In Loti's account his wife was fourteen years old, while in Gaugin's account Teha'amana was just thirteen years old.

The name Teha'amana is formed from the definite article te, the causative particle ha'a and the substantive mana ("strength"), and thus signifies "giver of strength", hence its frequent occurrence in ancient prayers and folklore. In his account of their idyll together, Gauguin described how in the evenings Teha'amana would recount their ancient myths as they lay in bed. Teha'amana was nevertheless a Christian, as evidenced by the missionary dress she wears in the portrait, and would have known nothing of Tahitian mythology. Bengt Danielsson, the Kon-Tiki anthropologist, notes that Teha'amana recounting the old myths is an especially barefaced fiction, because not only were these largely forgotten, they had always been withheld from women. All Gauguin's accounts of ancient Tahitian religion in Noa Noa were copied from other sources without adequate acknowledgement.

Having a vahine brought practical advantages regarding food supplies. This was because Tahitian families were self-sufficient in food. The staples of breadfruit and bananas were gathered high in the mountains on a weekly basis, while fish was abundant in the lagoons. Pigs were hunted in the undergrowth. As a consequence there was no trade in foodstuffs and offering food was regarded as an act of charity. Gauguin had no time to gather food for himself, even if he had the skill and strength, if he was to paint as well. He was thus forced to provision himself with very expensive tinned European food from the local Chinese merchant. Having a vahine meant at least he had access to wild fruit and fresh shrimp gathered by her, as well as her own family's extensive food stores.