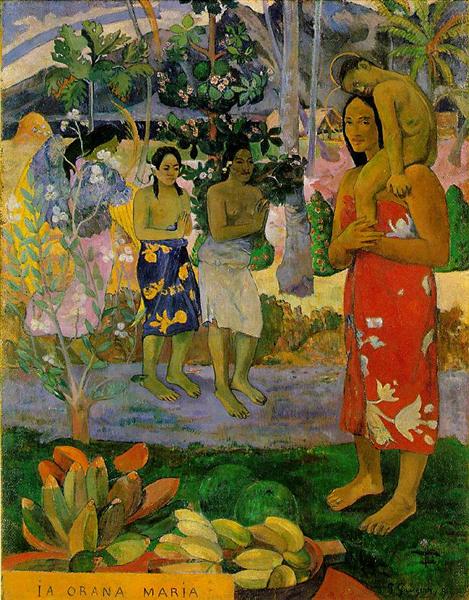 Ia Orana Maria (Hail Mary) (1891) was the first major canvas Paul Gaugin painted in Tahiti. He traveled there in 1891 seeking a wild tropical paradise free from the constraints of modern society. The artist soon discovered that this ‘primitive paradise’ did not exist, and instead he witnessed the impact of French colonial policies that the suppression of Polynesian native culture, customs, and religious beliefs.

In Ia Orana Maria Gauguin subtly addressed this tension by translating the traditional Christian subject to a Polynesian setting. The painting depicts an encounter between two Tahitian women and a visionary Madonna and Child. The women pay homage to the Madonna and Child, greeting them with words written in Roman characters at the bottom left of the painting ‘Ia Orana Maria’. ‘Ia Orana’ is a common salutation in Tahiti, meaning that the title of the painting translates to the greeting ‘Hello Mary’ or ‘Hail Mary’. Next to the two women is the figure of an angel with golden wings that are separated and partially concealed by a flowering bush. This arrangement is reminiscent of Vision After the Sermon: Jacob Wrestling with the Angel (1888), in which the tree trunk in the center of the composition separates the angel from the devout Bretton women. While the Tahitian setting is lusher and more colorful, the two paintings share the principle of combining everyday life with supernatural elements.

Ia Orana Maria is an example of Gauguin’s ability to fuse different cultural influences: Christian iconography with references to non-Western (Polynesian, Javanese, Japanese) cultures. Gauguin often relied on reproductions and photographs as sources for his paintings, and these visuals were often essential to his artistic practice. One of these photographs was of the Buddhist temple of Borobudur on the island of Java. The photo shows two sculptured friezes, Monks on the Benares Road at the top and The Arrival of Maitrakanyaka at Nandana at the bottom. Gauguin appropriated elements from the frieze to the composition of Ia Orana Maria: he used the two male figures from the left side of the top frieze as the basis for the female worshipers who pay homage to the Tahitian Virgin and Child. He also altered the clothing and covered the women’s bodies with Tahitian pareos and drapery. By combining different sources and adjusting them into a new structure, Gauguin was able to transform the creations of other artists into his own. The figures from the temple of Borobudur continued to be an inspiration for the artist in later works such as the painting Faa Iheihe (1898) and the woodcut Changement de résidence (Change of Residence) (1899).

Gauguin described Ia Orana Maria in detail in a letter from March 1892 commenting that he was pleased with the painting. He also reproduced the motif of Madonna and Child from the painting into other mediums, such as the zincograph Ia Orana Maria[/i[/url]] (1894) and charcoal drawing Ia Orana Maria (1895), that he dedicated to Neo-Impressionist artist and patron Count Antoine de La Rochefoucauld.