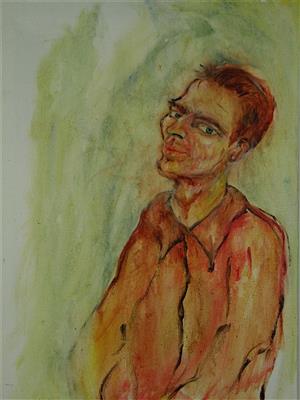 Paul F. Yount ( born 1961 Hickory, North Carolina) is an American artist who lives and works in the United States. Yount is known for his large scale narrative paintings that have deep social, psychological connotations. Yount’s life being part of the tapestry of urban and rural life by living in the Southern states, Boston Los Angeles, Hawaii, Central Florida and extensive time traveling US cross-country, Europe and Africa.

Yount explored his inner struggles through the tremendous output of his self portraits that he raised to a spiritual transcendental level. His large narrative paintings have an unearthly glow with the use of color and mysterious content. The constant gnawing that he was an outsider in the art world only fine tuned his paintings to take on a more individualistic style.

After receiving his BFA from The University of TN in 1983 he moved to Boston MA to explore the world.The arduous life of an artist became more fuel for him to paint and in 1994 he studied at The Museum of Fine Arts Museum School Boston MA.

The early years saw Yount exploring themes of sexuality with an extreme intensity combined with religious concepts.
The paintings have matured into a narrative style that is unique to the vocabulary of Yount’s symbols and metaphors connected to his figures.
The circumstances and in particular the close people around him were the constant inspirational muses that he incorporated into his paintings.
In 2020 he was awarded the Adolph and Esther Gottlieb Individual Support Grant.