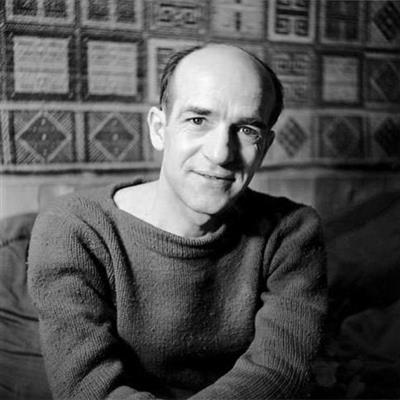 Paul-Émile Borduas (November 1, 1905 – February 22, 1960) was a Québec painter known for his abstract paintings. He was the leader of the avant-garde Automatiste movement and the chief author of the Refus Global manifesto of 1948. Borduas had a profound impact on the development of the arts and of thought, both in the province of Quebec and in Canada.

Borduas was born on November the first, 1905, in Saint-Hilaire, Quebec (a small village 50 kilometers from Montréal). He was the fourth child of Magloire Borduas and Éva Perrault. As a child he engaged in bricolage - his first known artistic activity. He received five years of formal elementary school education, (which ended at the age of twelve) and some private lessons from a village resident. Fortuitously, Borduas met Ozias Leduc in the winter of 1921-1922, and Leduc agreed to take the young artist under his wing. At the age of sixteen he became an apprentice to Ozias Leduc, who was a church painter and decorator. Leduc provided Borduas with a basic artistic training, teaching him how to restore and decorate churches. Leduc arranged for Borduas' instruction at the École Technique, in 1919, in Sherbrooke, Québec. In 1923, assisted by a scholarship Leduc had secured for him, he enrolled in the École des Beaux-Arts de Montréal, continuing to work for Leduc at the same time. He received prizes for his paintings at both of these institutions. Despite discord between Borduas and the school administration, he continued his studies at Leduc's urgings.

Upon graduation in 1927 Borduas was hired by the Montréal Catholic School Board as a high school art teacher. In January 1929 he began studies at the Ateliers d'Art Sacré in Paris, which he left to pursue church decoration work of Rambucourt, in the Meuse Valley, with Pierre Dubois in April. He returned to Saint-Hilaire in June 1930 (his funds being depleted), began teaching part-time, and in 1933 returned to teaching high school for the Catholic School Board of Montréal. In 1937 Borduas began teaching at l'École du Meuble. This was an important time in Borduas' life: «by meeting young men of his own generation with the same tastes and the same need for action, he finally discovered a stimulating intellectual and social environment».

In 1938 he encountered John Lyman, a Montréal painter and critic, at the first exhibition of one of Borduas' paintings. Lyman encouraged Borduas' involvement with the Contemporary Arts Society, and in January 1938 he was elected vice-president of this group. In 1941 he resumed painting after several years of study and teaching, during which time he and a group of students had met regularly to discuss recent trends in European art. His first abstract paintings date from this year, and in April 1942 he exhibited forty-five gouaches inspired by the abstract surrealism of Joan Miró. He became increasingly involved with about a dozen of his students, and they became known collectively as the Automatistes for their attempts to paint with pure psychic automatism as per the writings of André Breton. In January 1946, the first group exhibit of Borduas and his students was held in New York City, followed in April by an exhibit in Montreal. This was the first exhibit by a group of abstract painters in Canada. A second Montreal exhibit followed in February–March 1947. A critic, responding to this exhibit, coined the name "Automatists" for the group, after Borduas' painting Automatisme 1.47.