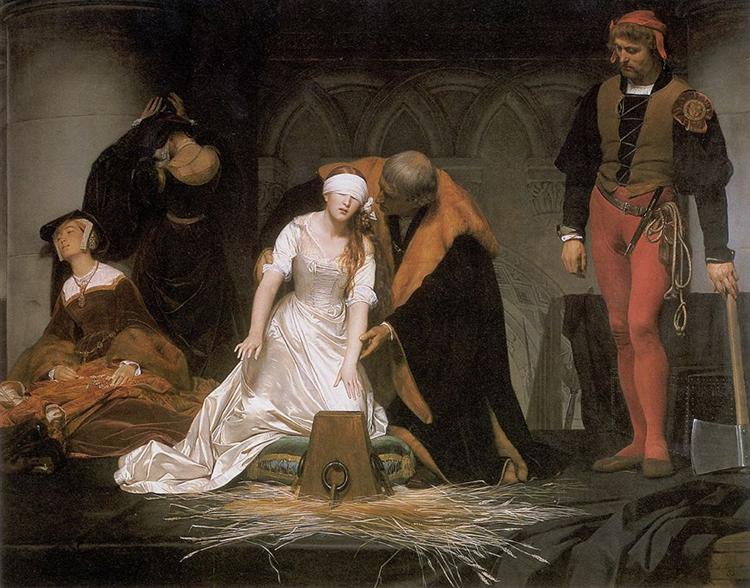 The Execution of Lady Jane Grey

The Execution of Lady Jane Grey is an oil painting by Paul Delaroche, completed in 1833, which is now in the National Gallery in London. It was enormously popular in the decades after it was painted, but in the 20th century realist historical paintings fell from critical favour and it was kept in storage for many decades, for much of which it was thought lost. Restored and displayed again since 1975, it immediately once again became a highly popular work, especially with younger visitors.

The painting portrays, erroneously in some regards, the moments preceding the death of Lady Jane Grey, who on 10 July 1553 was proclaimed Queen of England, only to be deposed nine days later and executed in 1554. Jane is sometimes referred to as the "Nine Days' Queen" due to the brevity of her reign.

Lady Jane Grey was the great-granddaughter of Henry VII of England and first cousin once removed to his grandson, the short-lived Edward VI. After Edward's death she was proclaimed queen, being given precedence over Henry VIII's daughters, Mary Tudor and Elizabeth. Two weeks after the death of her brother, Mary, who had the support of the English people, claimed the throne, which Jane relinquished, having reigned for only nine days. Jane, her husband Lord Guilford Dudley, and her father, were imprisoned in the Tower of London on charges of high treason. Jane's trial was conducted in November, but the death penalty handed to her was temporarily suspended. In February 1554, Jane's father, who had been released, was one of the rebel leaders in Wyatt's rebellion. On Friday 12 February, Mary had Jane, then aged 16, and her husband beheaded. Her father followed two days later.

Delaroche painted the subject of Lady Jane's execution in 1833, nearly 300 years after the event, drawing upon contemporary historical sources to help him portray it accurately. Delaroche had built his reputation in the Paris salon with large, realistic portrayals of famous events from the previous few centuries. Despite the artist's familiarity with the painting of historical narratives, there are aspects of the painting which are inaccurate.

The painting depicts the moment that Jane, blindfolded, is being assisted to lay her head upon the block for the executioner. Her outstretched hand reaches uncertainly down to find the block. She is being assisted by a man who is identified as John Brydges, 1st Baron Chandos. Chandos was a Lieutenant of the Tower at the time of Jane's execution. While imprisoned in the Tower, Jane was attended by ladies in waiting, one of whom was the nursemaid of her infancy. Two ladies in waiting are depicted in the painting, showing their grief at the event which is about to take place.

The execution actually was conducted in the open air, in a part of the grounds of the Tower of London that is known as Tower Green, and where Henry VIII's wives Anne Boleyn and Catherine Howard had been executed. The painting indicates either that Delaroche was not familiar with this aspect of the event and has constructed the location according to his historical knowledge of other such events, or that he chose to take a great deal of artistic license.