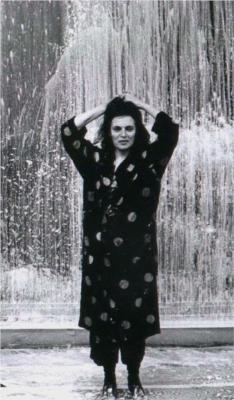 Pat Steir (born 1940) is an American painter and printmaker. Her early work was loosely associated with Conceptual Art and Minimalism, however, she is best known for her abstract dripped, splashed and poured “Waterfall” paintings, which she started in the 1980s, and for her later site-specific wall drawings.

Steir has had retrospectives and exhibitions all over the world, including the Tate Gallery in London, and shows at the Brooklyn Museum and the New Museum of Contemporary Art that traveled throughout Europe. She has won numerous awards for her work, and is thoroughly represented in major museum collections in the United States and abroad, including the Metropolitan Museum of Art and the Museum of Modern Art in New York City and the Tate Gallery. She is a founding board member of Printed Matter bookshop in New York City, and of the landmark feminist journal, Heresies, first published in 1977. Steir has also taught art at Parsons School of Design, Princeton University and Hunter College. She has lived and worked primarily in New York City as an adult.

As of September, 2016, Steir is represented by Lévy Gorvy in New York and London.

Steir was born Iris Patricia Sukoneck in 1940 in Newark, New Jersey. She attended the Pratt Institute in New York (1956–1958), where she was influenced by her teachers Richard Lindner and Phillip Guston, and Boston University College of Fine Arts (1958–1960). Steir returned to Pratt and earned a BFA degree in 1962.

In 1962, the year she graduated from art school, Steir was included in a group show at the High Museum of Art in Atlanta, Georgia. In 1964, her work was in a show called “Drawings” at the Museum of Modern Art in New York. Her first one-person exhibition was at the Terry Dintenfass Gallery, New York, in 1964. During that time, she worked in New York as an illustrator and a book designer (1962–1966). Between 1966–1969, Steir was an art director at Harper & Row publishing company, New York. Around 1970 she became friends with Sol LeWitt, Lawrence Weiner, and other conceptual artists, and she made the first of many trips to New Mexico to visit Agnes Martin.

She rose to fame in the 1970s with monochromatic canvases of roses and other images that were X-ed out. The artist explained, “I wanted to destroy images as symbols. To make the image a symbol for a symbol. I had to act it out―make the image and cross it out. …no imagery, but at the same time endless imagery. Every nuance of paint texture worked as an image.” Nothing from 1974, in the collection of the Honolulu Museum of Art, is an example of this phase of the artist's work.

Steir's first museum exhibition, in 1973 at the Corcoran Gallery of Art, Washington, D.C., marks the beginning of a career dense with painting exhibitions. She has also made installation work (shown at Documenta IX, Kassel, Germany, in 1992) and is an important printmaker. Crown Point Press began publishing her prints in 1977 and in 1983 the Spencer Museum of Art, University of Kansas, gave her a print and drawing exhibition. A print retrospective at the Cabinet des Estampes in Geneva traveled to the Tate Gallery in London, England. Steir has had one-person painting exhibitions at the Brooklyn Museum in 1984 and the New Museum of Contemporary Art in New York in 1987, both of which traveled to other museums, many in Europe.