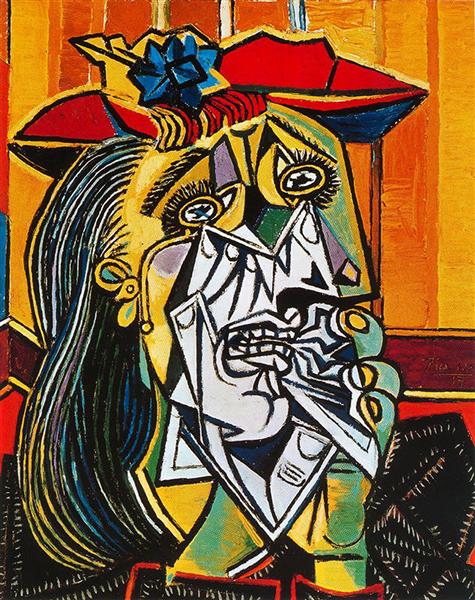 During 1937 Picasso became obsessed with the motif of a weeping woman, which symbolised for him the anguish and devastation of the Spanish Civil War. The figure first appeared among the sketches for Guernica, his famous depiction of the German bombing raid on a Basque town. Picasso produced between sixty and seventy preparatory works and postscripts to Guernica. Of the subjects he explored the most frequently depicted image is that of a single female head, bearing an expression of anguish and engulfed in tears. There has been traced thirty-six unique works depicting such images, executed between May and the end of October 1937: 9 paintings on canvas, 21 drawings on paper or card, and 6 small drawings on matchboxes.

The ‘architecture’ of the woman's face in Weeping Woman is, however, very different from the flat outlined faces of Guernica. Furthermore, the brilliant and brash colouring of this painting was not only shocking in itself but particularly powerful in being associated with grief.

The model for the entire Weeping Woman series was a professional photographer Dora Maar, who was one of the leading surrealist artists of the 1930s. After meeting Picasso in Paris, in 1936, she became his mistress, muse, and intellectual companion. A strong personality, she was instrumental in expanding Picasso's political awareness, and he painted her dozens of times over the course of their relationship from 1936 to 1943.

Weeping Woman was purchased from Picasso by the British Surrealist artist Roland Penrose shortly after it had been completed in early November 1937. Penrose contextualized this artwork as a Surrealist painting and as a major postscript to Guernica.