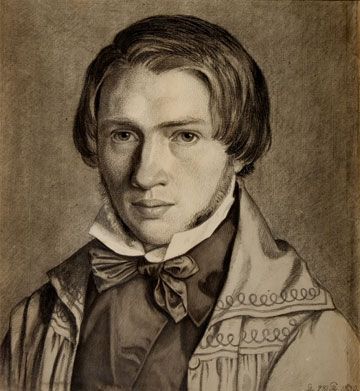 Peter Christian Thamsen Skovgaard (known as P. C. Skovgaard; 4 April 1817 – 13 April 1875) was a Danish national romantic landscape painter. He is one of the main figures associated with the Golden Age of Danish Painting. He is especially known for his large scale portrayals of the Danish landscape.


Skovgaard was born near Ringsted to farmer Tham Masmann Skovgaard and his wife Cathrine Elisabeth. The family had to leave the farm when he was six years old. They moved to Vejby in north Sjælland where his father earned his living as a grocer. Already as a young child he impressed his family with his artistic abilities. His mother, who had studied art under flower painter Claudius Ditlev Fritsch, gave him instructions in drawing until he was confirmed and could be sent to Copenhagen for training at the Royal Danish Academy of Art (Det Kongelige Danske Kunstakademi).

He started his training at the Academy in 1831. He did not think much of this training or of that under private lessons starting in 1836 with J. L. Lund, romantic history painter. More advantageous to him, he felt, were the time he spent learning craft painting; the time he spent visiting the Danish Royal Painting Collection, now the National Museum of Art and studying the classical Dutch landscapes in their collection; the outdoors studies he did with friends Christian Gotfred Rump, J. Th. Lundbye, Thorald Læssøe, Dankvart Dreyer and Lorens Frølich; and the many evenings he spent with other young artists at sculptor and Academy professor Herman Ernst Freunds' fashionable house. Christoffer Wilhelm Eckersberg, Academy professor, former Director and long-standing rival of Lund, although not Skovgaard's teacher, played an influential role by encouraging and arranging field studies for Academy students to paint outdoors, including to Jægersborg Dyrehave, an area which Skovgaard featured several times in his mature work.


In 1836 he started at the Academy's School of Model Painting, and exhibited at Charlottenborg for the first time. His painting Måneskinsstykke med Motiv fra Langebro (Moonlight Piece with Motif from Langebro) was purchased by Crown Prince Christian Frederick and is now in the collection of the Copenhagen City Museum.


With the attention and encouragement of such highly regarded contemporaries as Niels Lauritz Høyen, art critic, historian and Academy professor whom he admired, and Christian Jürgensen Thomsen, noted archaeologist and museum administrator, Skovgaard got the nerve to focus his career goals on art, and turn away from craft painting.


But landscape painting soon took the better part of his interest and attention. And with this focus he became recognised for his talents in truthfully and ideally depicting the nature of Denmark, based on careful study and on artistic and technical skills and training. He painted numerous paintings in and around Vejby, his family's home area, in these early years, and he showed many different influences before developing his own assured style.