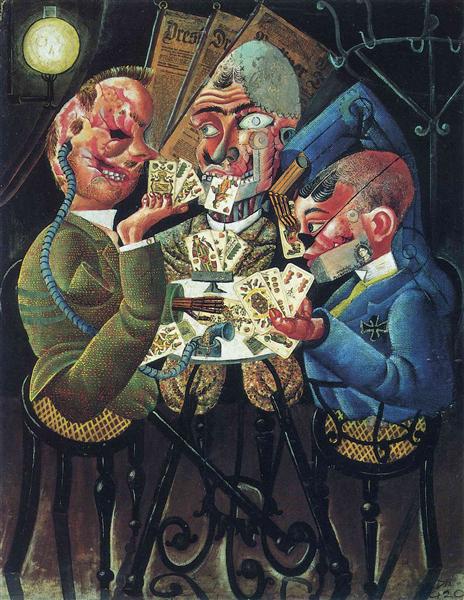 One of Dix’s early post-war paintings, which displays the harsh reality of the Weimar Germany in the style of the New Objectivity movement, is The Skat Players painted in 1920. After Germany’s defeat in the First World War, the day-to-day life turned into a grotesque display of mutilated, shell-shocked, and depraved members of society. Dix’s way of getting across his belief of the degrading post-war life was through usage of less symbolism, and more realistic notions, specific for the New Objectivity. The artist wanted to make a clear statement in regard to the damage and destruction the war can do to society, treating the matter in a detached way, showing both a satirical attitude and a serious side of things.

In this painting, Dix presents the war as a gamble, a skat game between the crippled and deformed soldiers, expressing the shocking new reality of that time. Three disfigured soldiers represent the new stereotype of the Weimar Republic: the unemployable and miserable war veterans that are disposed by the working class based society after serving for their country. Without a purpose or a place in life, viewed only as a token of the German defeat, the only thing left for the veterans is playing cards and passing time with fellow soldiers.

Besides giving shape to terror, Dix painted this tableau to illustrate the dehumanizing effects a war has on people, stripping them of all their senses, as the characters are portrayed deaf, blind, burnt, and crippled. The fact that the soldiers have patches and numerous aiding devices sends the viewer into the era of industrialized war. The prosthetics, hearing aids, and glass eyes depict the misuse of technology and industrial progress for the soldiers disabled in the war. To add a personal touch to the artwork, and to show a personal view of the matter, Dix left a small self-portrait within the painting alongside a marking that says unterkiefer prothese marke Dix meaning 'lower jaw prosthesis brand Dix'.The interesting fact is that Dix left this mark on the soldier that had an Iron Cross decoration, a medal which was awarded to the artist himself during the war, therefore showing empathy toward his subjects and identifying with them.