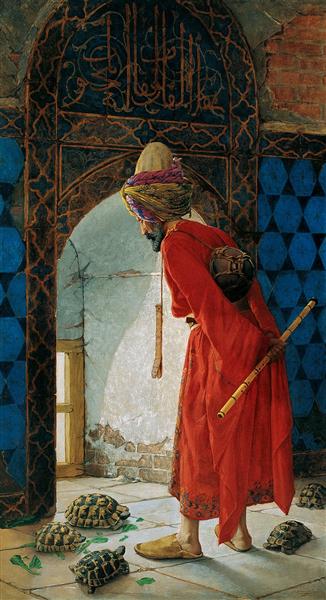 His 1906 painting, "The Tortoise Trainer", recently broke a record in Turkey by being sold for the amount of 3.5 million dollars in December 2004. The painting expresses a sarcastic innuendo on the painter's own view of his style of work compared to those of his collaborators and apprentices, and is also a reference to the historical fact of tortoises having been employed for illuminative and decorative purposes, by placing candles on the shell, in evening outings during the Tulip Era in the early 18th century. The painting was acquired by the Suna and İnan Kıraç Foundation and is currently on display at the Pera Museum in İstanbul, which was established by this foundation.

Modern researchers have identified the animals portrayed are Testudo graeca ibera, a variety of the Spur-thighed Tortoise. A reproduction of the painting appeared on the cover of the Bibliotheca Herpetologica issue in which the paper about the identification was published.

The Tortoise Trainer (Turkish: Kaplumbağa Terbiyecisi) is a painting by Osman Hamdi Bey which was crafted in 1906 and 1907 (two versions). In 2004 it was sold for $3.5M and is currently displayed at the Pera Museum in Istanbul.

In the Tortoise Trainer, Osman Hamdi Bey satirises the slow and ineffective attempts at reforming the Ottoman Empire, through the attempts of an anachronistic historical character to train tortoises. The painting depicts an elderly man in traditional Ottoman religious costume which predates the introduction of the fez and the spread of Western style dress with the Tanzimat reforms in the mid 19th century. He holds a traditional ney flute with which he is attempting to "train" the tortoises at his feet.

Osman Hamdi Bey created the painting at a time of great social and political turmoil in the Ottoman Empire. The reforms introduced by Sultan Abdülhamid II had either proved ineffective, or had been blamed for the increased upheaval. The Ottoman Empire, which still encompassed parts of the Balkan peninsula, parts of North Africa, all of Anatolia and the Levant, and much of the Arabian peninsula at the turn of the 20th century, was under serious threat from both the growing power of nationalist movements within its territory, and from the incursions of foreign powers which would eventually divide the empire between them in the aftermath of the First World War.

Although not widely shown or understood at the time, the painting achieved greater significance in subsequent decades as it presaged the Young Turk Revolution of 1908 which brought an end to the direct autocratic rule by the Sultan (replaced by the regime of the Three Pashas after the 1913 coup d'état) and set the stage for the Empire's entry into the First World War on the side of the Central Powers and for its subsequent partitioning.