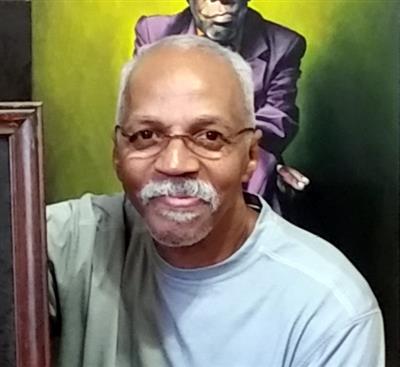 Completely self-taught, Oliver Johnson started drawing when he was a young boy in Jacksonville, Florida, where he was born in 1948. He had a tumultuous youth and spent much time in and out of reform schools and prisons.

During these confinements he always painted. No matter in which prison he spent time, he was provided with canvas and paints and, of course, plenty of time. He would search the prison library to find books or magazines on art and would leaf through them into the early hours of the morning. At Auburn, the other prisoners encouraged him to paint, and later he taught art to his fellow inmates. By the time he was paroled, there was a waiting list to attend his classes.

Johnson's turning point came in 1977 when a New York television station was sent to cover a group show at the Bedford Stuyvesant Restoration Art and Cultural Center in Brooklyn, and they singled him out for a special segment. It was through that broadcast that Felicie, and her husband, the retired president of the Knoedler Gallery, spotted Johnson's talent and signed him on. Together, they arranged his first exhibition to be held at the prestigious Wildenstein Gallery in New York City.

Over the years, Felicie arranged exhibitions for his work at art galleries throughout the United States, along with the many exhibitions at Gallery Felicie, itself. The most exciting and widely publicized of all Johnson's exhibits were one on JAZZ, and another, on CATS.

Oliver Johnson has developed his own style. He is an excellent draftsman. Whatever his subject may be, his talent is seen in his striking oil paintings and in his pastels and drawings as well. He has a keen sense of volume, line, and the relationship of color.