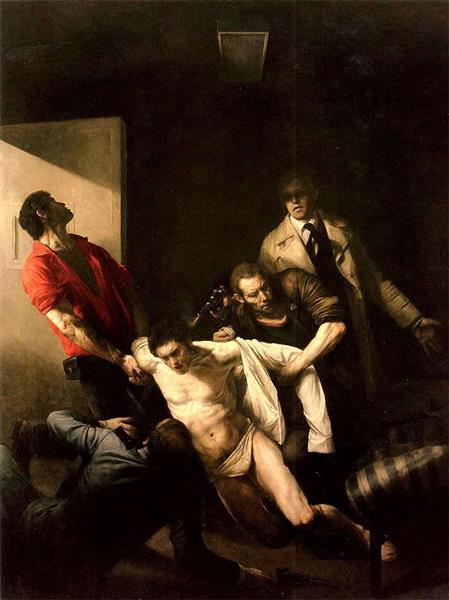 The Murder of Andreas Baader

The painting The Murder of Andreas Baader (1977-1978) is one of Odd Nerdrum’s most notable early works. The scene depicted by the Norwegian painter refers to the death of Andreas Baader, one of the founders of the Baader-Meinhof group, a far left militant organization. The group was responsible for numerous crimes, including murder and kidnapping, which resulted in the imprisonment and conviction of the group’s leadership. In an attempt to negotiate their release, other members kidnapped the businessman and industrialist, Hanns Martin Schleyer, and hijacked a Lufthansa plane in Somalia. On the night of October 17, 1977, the state ran a successful operation and was able to recover control of the hijacked plane. The next morning, three of the convicted leaders, including Andreas Baader, were found dead in their cells and the fourth was injured with multiple stab wounds. The German authorities reported the incidents as suicides, however many speculated that the prisoners were murdered by the state. Nerdrum’s painting adopts the unofficial version, depicting an execution sanctioned by the state.

Nerdrum modeled the painting after Caravaggio’s Baroque masterpiece, Crucifixion of St. Peter (1601). The main points of comparison between the two paintings are the dramatic composition and the use of chiaroscuro - a term that refers to strong contrasts between light and dark. It has a symbolic function in Carvaggio’s Crucifixion of St. Peter: the saint being bound to the cross is in the light, while his assailants are in the shadows and depicted from the back. Nerdrum adopts these characteristics: the victim bathes in light while the perpetrators are largely in the shadows or facing away from the viewer. The greatest contrast is between Baader, naked and beaten, and the figure of the executioner, emerging from the dark, coldly pointing a gun at Baader’s head.

Nerdrum’s painting drew controversy in Norway and Germany, as the public was still reeling from the traumatic events of the “German Autumn”. At the time, Nerdrum’s politics were largely formed by anarchist views, and he was sympathetic toward Baader as an uncompromising and tragic idealist. The depiction of Baader as a martyr caused public outrage, but at the same time it opened up space for important discussion and critique. The Murder of Andreas Baader challenged the credibility of state authority, and critiqued the contemporary world and the modern state. For Nerdrum, modern societies embrace values of benevolence and kindness but in the shadows use brutality and violence.

The depiction of Baader as a martyr of state tyranny is characteristic for this period in Nerdrum’s career. Many of Nerdrum’s early paintings focused on human suffering, particularly figures at the fringes of society, losers and underdogs that are either ignored or victimized by society. This is the common theme of paintings such as Morning (1972-1973) and Abandoned (1977-1978). Even though these paintings focus on a single figure unlike Murder of Andreas Baader, they share the negative attitude toward the state and modern society.


The painting is in the collections of the Astrup Fearnley Museum of Modern Art in Oslo.


Andreas Baader is partially naked in his cell in the Stammheim Prison. Two men hold Baader while a third lies beaten on the floor before him. A fourth man in trenchcoat executes Baader with a gun shot to the back of the neck. The men are positioned in the shape of a St Andrew's Cross. The composition and chiaroscuro are inspired by Baroque art, with associations to Caravaggio's Crucifixion of St. Peter.


Baader had died on 18 October 1977 in what became known as the Stammheim "Death Night", when also Gudrun Ensslin and Jan-Carl Raspe died. In the official version they committed suicide, but rumours and theories spread quickly that they had been murdered by secret agents. Nerdrum was an anarchist at the time he made the painting. He later described his attraction to the Baader-Meinhof group: "What particularly fascinated me was the expression of the free man that I saw in them. Otherwise I had sympathy for Baader to the extent that he was one of the many who were ready to die for their cause. To me he was the uncompromising, tragic idealist."


The painting was presented at Høstutstillingen in Oslo in 1978. It immediately drew strong reactions in both Norway and Germany for its way of depicting a terrorist as a religious martyr, as well as supposing he was murdered. The painting established Nerdrum as a political voice in the Norwegian public discourse.