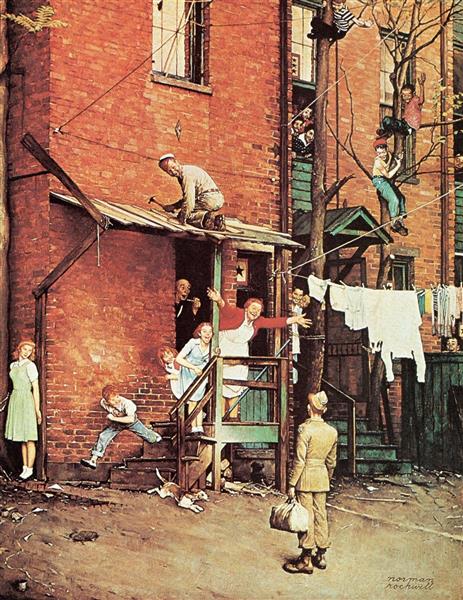 The homecoming (1945) appeared on the cover of the Saturday Evening Post. Rockwell created an image of American life after the Second World War. It was a story about heroes and their families, about friendly people united by doing simple good things.

The subject of the painting is clear: a young boy, military, returns home, unleashing the joy of his family in full force. The relatives throw themself to embrace him, the neighbors look out the windows, the boys of the neighborhood greet him from the trees, and a mysterious girl, perhaps the girlfriend left at home, shudders, hidden behind the corner of the house. On the doorstep, now open, the star emblem, a symbol of family pride, of the soldier sent to defend the Homeland. Rockwell chooses to show everyone's face, even the neighbor climbing on the fence to watch or the worker adjusting the roof, but not the boy's. His face is the joy of those who welcome him. His face is the uniform he wears, his erect posture, his bag clutched in his hand. He is at home, having served well.

The artist had a passion for red color. All the protagonists have red hair, and the mother with her arms wide open wears a red sweater, above the apron. The father, who takes his pipe from his mouth to open his face in an expression of amazement, has the face of Rockwell. As if the artist wanted to take part in this joy, to say that it is the joy of everyone and each one: see the children return, at the end of the war on the other side of the ocean.