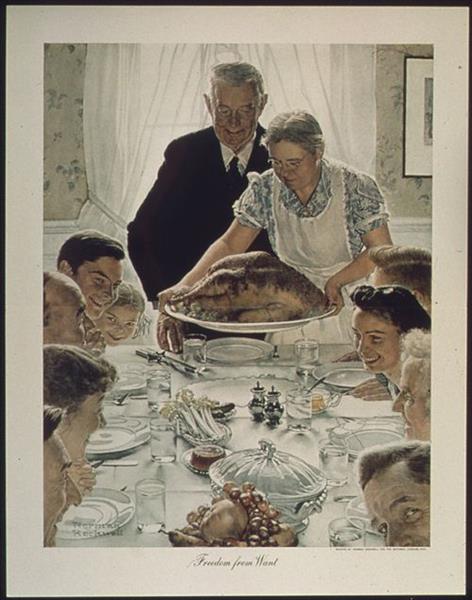 Freedom from Want, also known as The Thanksgiving Picture or I'll Be Home for Christmas, is the third of the Four Freedoms series of four oil paintings by American artist Norman Rockwell. The works were inspired by United States President Franklin D. Roosevelt's 1941 State of the Union Address, known as Four Freedoms.


The painting was created in November 1942 and published in the March 6, 1943 issue of The Saturday Evening Post. All of the people in the picture were friends and family of Rockwell in Arlington, Vermont, who were photographed individually and painted into the scene. The work depicts a group of people gathered around a dinner table for a holiday meal. Having been partially created on Thanksgiving Day to depict the celebration, it has become an iconic representation for Americans of the Thanksgiving holiday and family holiday gatherings in general. The Post published Freedom from Want with a corresponding essay by Carlos Bulosan as part of the Four Freedoms series. Despite many who endured sociopolitical hardships abroad, Bulosan's essay spoke on behalf of those enduring the socioeconomic hardships domestically, and it thrust him into prominence.


The painting has had a wide array of adaptations, parodies, and other uses, such as for the cover for the 1946 book Norman Rockwell, Illustrator. Although the image was popular at the time in the United States and remains so, it caused resentment in Europe where the masses were enduring wartime hardship. Artistically, the work is highly regarded as an example of mastery of the challenges of white-on-white painting and as one of Rockwell's most famous works.


Freedom from Want is the third in a series of four oil paintings entitled Four Freedoms by Norman Rockwell. They were inspired by Franklin D. Roosevelt's State of the Union Address, known as Four Freedoms, delivered to the 77th United States Congress on January 6, 1941. In the early 1940s, Roosevelt's Four Freedoms themes were still vague and abstract to many, but the government used them to help boost patriotism. The Four Freedoms' theme was eventually incorporated into the Atlantic Charter, and it became part of the charter of the United Nations. The series of paintings ran in The Saturday Evening Post accompanied by essays from noted writers on four consecutive weeks: Freedom of Speech (February 20), Freedom of Worship (February 27), Freedom from Want (March 6), and Freedom from Fear (March 13). Eventually, the series was widely distributed in poster form and became instrumental in the U.S. Government War Bond Drive.


The illustration is an oil painting on canvas, measuring 45.75 by 35.5 inches (116.2 cm × 90.2 cm). The Norman Rockwell Museum describes it as a story illustration for The Saturday Evening Post, complementary to the theme, but the image is also an autonomous visual expression.


The painting shows an aproned matriarch presenting a roasted turkey to a family of several generations, in Rockwell's idealistic presentation of family values. The patriarch looks on with fondness and approval from the head of the table, which is the central element of the painting. Its creased tablecloth shows that this is a special occasion for "sharing what we have with those we love", according to Lennie Bennett. The table has a bowl of fruit, celery, pickles, and what appears to be cranberry sauce. There is a covered silver serving dish that would traditionally hold potatoes, according to Richard Halpern, but Bennett describes this as a covered casserole dish. The servings are less prominent than the presentation of white linen, white plates and water-filled glasses. The people in the painting are not yet eating, and the painting contrasts the empty plates and vacant space in their midst with images of overabundance.