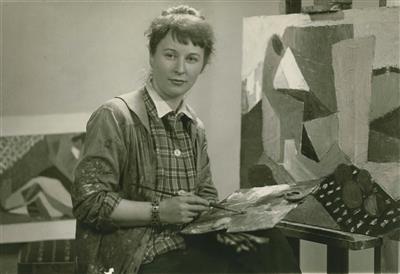 Nína Tryggvadóttir (March 16, 1913 – June 18, 1968) was born Jónína Tryggvadóttir in Seyðisfjörður, Iceland. She is one of Iceland's most important abstract expressionist artists and one of very few Icelandic female artists of her generation.


Nína Tryggvadóttir was born on March 16, 1913, in Seyðisfjörður. In 1920 the family moved to Reykjavik. She studied art from Ásgrímur Jónsson, a close relative on her father’s side. From 1933 to 1935 she also attended classes of Finnur Jonsson and Johann Briem. She moved to Copenhagen in 1935 where she studied art at the Royal Academy of Art. After graduating from the Academy in 1939 she spent time studying in Paris and was quite taken by the city.


In 1942 she and her fellow artist Louisa Matthíasdóttir moved to New York City to study at the Art Students League of New York and develop her art further. There she took an active part in the city’s art scene.


In 1949 she married Alfred L. Copley (alter ego: L. Alcopley). Later that year she went to Iceland for a short visit. There she was informed that she was not able to return to the United States because she was suspected of being a Communist sympathizer.


During her exile from the United States she lived in various places in Europe, Iceland being one of them. Copley joined her in Paris where they lived for a few years together with their daughter Una Dóra Copley, born 1951. During those years Nina kept making and practicing her art, exhibiting in many places and traveling through Europe. They returned to New York City in 1959 where Nína continued to work on her art and exhibiting mostly in Europe. During all her years abroad Nína kept exhibiting in Iceland and was her input very valuable to the art society in Iceland.


Mainly working in painting she also did paper collage, stained glass work, mosaic and more. She frequently based her compositions on nature where Icelandic landscape and the Nordic light played an important role.

In 2012, a crater on Mercury was named after Tryggvadóttir.


In May 2018, the Reykjavík City Council signed a declaration of intent between the city and couple Una Dóra Copley and Scott Jeffries to set up an art museum dedicated to Nína Tryggvadóttir. The couple donated their art collection to the city.