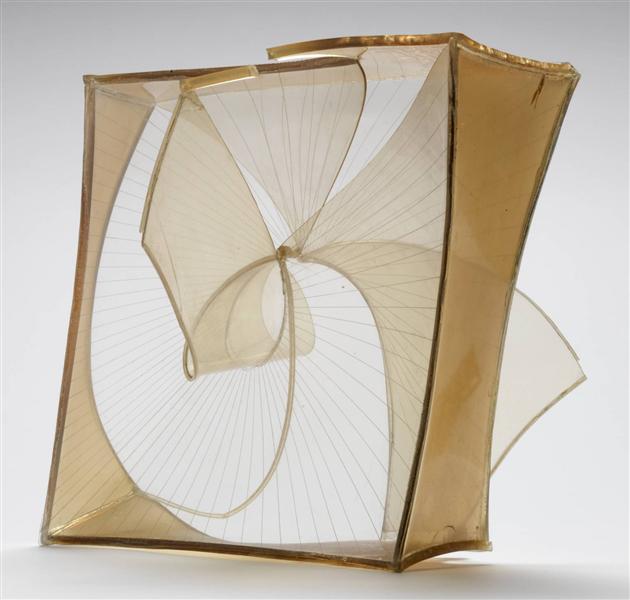 Construction in Space (Crystal) was the first work made entirely from transparent planes, an elegant formal solution to the challenge which Gabo had set himself twenty years earlier, that of expressing the dynamic interior of objects.

While Gabo had long been fascinated by scientific models and theories, often adapting their general conclusions for his sculptural ends, this work was directly inspired by a mathematical model. The model, in the Institut Poincaré in Paris, was typical of those reproduced in geometry handbooks, and represented an ‘oscillating developable of a cubic ellipse’ (reproduced in Nash and Merkert (eds.), p.35, fig.39). It had already attracted the attention of the Surrealists, having been exhibited in May 1936 in the Exposition surréaliste d’objets at the Galerie Ratton in Paris, and photographed by Man Ray (1890-1976) for a feature in Cahiers d’Art in the same year. While Gabo may have seen the model himself in Paris, he produced the initial sketches for the construction by tracing from an illustration of the model in the Encyclopaedia Britannica. Transposing the strung forms onto planes of transparent plastic stuck together with glue, he incised the sculpture with radiating lines to produce a sense of circular movement. Jan Gordon writing in The Observer in 1937 was ‘convinced that anybody with a true sense of three-dimensional form must be delighted by its subtle complexities and its ever-changing rhythms’ (quoted in Hammer and Lodder, p.237). This sense of dynamic forces and centrifugal energies relates to Gabo’s interest in modern physics, in particular to recent discoveries which pictured the physical universe as a continuous field of forces. In addition, his use of the word ‘crystal’ in the title of the work suggests a familiarity with the flourishing science of crystallography, which brought together the geometric and organic by examining the internal structure of molecules to reveal their mathematical regularity.

Despite these clear scientific references, Gabo disavowed any dependence on science in Construction in Space (Crystal). He was struck instead, as the Surrealists had been, by the model’s fanciful asymmetry and its unexpected form, saying later that his aim had been to ‘take this complicated formula and change its realisation to prove that what was basically a fantasy (the intuition of the mathematician) could be seen through the intuition of an artist’ (quoted in Nash and Merkert (eds.), p.223, note to 41).

This work was given by Gabo as an anniversary gift to his wife on 17 October 1947, by whom it was subsequently bequeathed to the Tate in 1995. (Jacky Klein)