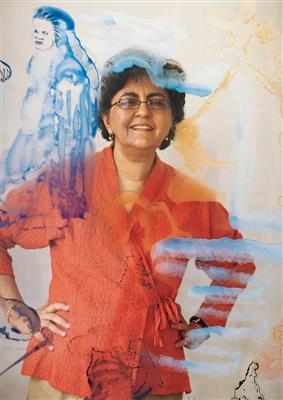 Nalini Malani (born 1946) is a contemporary Indian artist. In her early career, she primarily worked in the realms of painting and drawing. Since the 1990s her work expanded to other forms of media like video, film and projected animation. Her works are characterised by the expansion of the pictorial surface into surrounding space culminating in a layered visual narrative that takes the form of ephemeral wall drawings, shadow play, installations, multi projection works and theatre. She adheres to the vision of the artist as a social activist. Her artworks are often politically motivated and focus on themes of displacement, conflict, transnational politics, critical examination of gender roles and the ramifications of globalisation and consumerism. Throughout the course of her artistic career, she has strived to give voice to the stories of those marginalised by history with a focus on human and universal aspects of conflict and the relationship between the exploiter and the exploited. Literature has been a recurrent source of inspiration and reference for Malani. Her work has been featured in several international museums including Stedelijk Museum and the MoMA Museum of Modern Art. She lives and works in Mumbai.


Born in Karachi, British India (now Pakistan) in 1946, Malani's family sought refuge in India during the Partition of India. They moved to Kolkata, shortly before partition and relocated to Mumbai in 1958. Her family's experience of leaving behind their home and becoming refugees deeply informs Malani's artworks.


Malani studied Fine Arts in Mumbai and obtained a Diploma in Fine Arts from Sir Jamsetjee Jeejebhoy School of Art in 1969. During this period, she had a studio in the Bhulabhai Memorial Institute, Bombay, where artists, musicians, dancers and theater persons worked individually and collectively. It was here that she had the opportunity to meet and collaborate with artists from allied forms of artistic practice like theatre. She received a scholarship from the French Government to study fine arts in Paris from 1970-72. She was also a recipient of the Art Fellowship from the Government of India from 1984-89.


After her graduation, she spent a few years working with photography and film. The themes she explored during this period dealt with the turbulent time that India was experiencing politically and socially, as well the deepening literacy of moving image by its population. In the initial part of her career, Malani mostly focussed on paintings - acrylic on canvas & watercolour on paper. She produced a realistic socially based portrayal of Contemporary India. She continued to explore techniques such as the reverse painting method (taught to her in the late-80s by Bhupen Khakhar), which she would recurrently use in her future work. She was disappointed with the lack of acknowledgement that women artists had to face in India and resolved to bring them together for a group show to promote the sense of solidarity. In 1985, she curated the first exhibition of Indian female artists, in Delhi. This led to a series of travelling exhibitions that were taken to public spaces as an attempt to go beyond the elitist atmosphere of the art gallery.