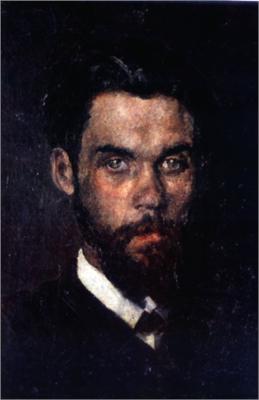 One of the most eminent Ukrainian genre painters, Pymonenko was widely acclaimed in the Russian Empire; a member of the Imperial Academy of Arts since 1904 and of a progressive Peredvizhniki artistic movement and the turn of the century, a member of the Paris International Union of Arts and Literature, who created many paintings of rural and urban subjects.
A number of Pimonenko's paintings are, in fact, generalized portraits which are the embodiment of a popular ideal of the working man. The artist also turned to the theme of peasant labour, depicting typical scenes from everyday life against the backdrop of a landscape.
Pymonenko took part in the painting of the murals in Saint Volodymyr's Cathedral in Kyiv. In 1897, for these paintings received the Order of St. Anne's third degree.
Born in Kyiv in 1862 into a family of an iconography master. Father - Kornyliy (Cornelius) Danylovych Pimonenko erected altars and painted churches. Son-in -law
of Volodymyr Orlovsky, the famous painter.
From 1878 he studied at the Kyiv drawing school. His teachers were well-known Ukrainian artists M. Murashko, Y. Budkevych, Kh. Platonov. In 1881 passed the exam at the Kyiv educational district. His examination work were sent to the St. Petersburg Imperial Academy of Arts, and after the decision of the Council of 3 December, 1881,he gave a pernission to be a painting teacher in lower secondary schools.
From 1882 he studied at the St. Petersburg Academy of Arts, but he had lung disease and material deprivation and due to them he left it in 1884. He was awarded with two small and one large silver medals of Petersburg Academy of Arts.
After returning to Kyiv, he taught at Kyiv Drawing School of Murashko.He took part in the exhibitions of the Society of South Russian Artists (1891–6) and Peredvizhniki society (from 1893) and became a member of the latter society in 1899. In 1909 he was elected a member of the Paris International Association of Arts and Literatures.
In 1901 was appointed a full-time teacher of drawing to the Kyiv Polytechnic Institute, where he worked tili the last days of his life. In 1906 he also taught at the Kiev Art School and was one of the organizers of it.
Pymonenko produced over 700 genre scenes, landscapes, and portraits, many of which were reproduced as postcards. They include Wedding (The Kyiv Gubernia) (1891), Girls Fortune-telling (1893), Kyiv Flower Seller (1897), At the Market (1898), Victim of Fanaticism (1899), Before the Storm (1906), Hay Gathering in Ukraine (1907), Meeting a Compatriot (1908), Young People (At the Well) (1909), Hopak (1908; bought by the Louvre), and Paschal Matins (1910). Pymonenko also created illustrations for several of Taras Shevchenko's narrative poems, and in the 1890s he took part in painting the murals in Saint Volodymyr's Cathedral in Kyiv. Books about him have been written by Yakiv Zatenatsky (1955) and P. Hovdia (1957), and an album of his works was published in Kyiv.
http://en.wikipedia.org/wiki/Mykola_Pymonenko
http://www.encyclopediaofukraine.com/pages/P/Y/PymonenkoMykola.htm
http://uk.wikipedia.org/wiki/Пимоненко_Микола_Корнилович

Mykola Kornylovych Pymonenko (Ukrainian: Микола Корнилович Пимоненко; 9 March 1862, Priorka, near Kiev — 26 March 1912, Kiev) was a Ukrainian painter; associated with the Peredvizhniki. He is best known for his urban and rural genre scenes of working-class people.

His father was a master iconographer and, after working as his assistant, he was taken to study icon painting at the Kiev Pechersk Lavra. In 1876, his works were seen by Mykola Murashko, one of the founders of the Kiev Drawing School, who was impressed and lobbied the school's financial backers to allow him to study there for free.

Two years later, he was able to enter the school where he worked with Murashko, Khariton Platonov and others. His examination work was sent to the Imperial Academy of Fine Arts in 1881, he received a license to teach drawing in the lower secondary schools and was able to audit classes at the Academy. He later married the daughter of one of his instructors, Volodymyr Orlovsky.

In 1884, due to poor health (possibly tuberculosis) and financial difficulties, he returned to Kiev, where he found work as a drawing teacher at a private school. He moved to the Kiev Polytechnic Institute in 1901, when the school went out of business, and remained there for the rest of his life. After 1906, he also taught at the new Kiev Art School, which he helped organize. Kazimir Malevich was one of his most notable students.

In 1897, he participated in decorating St Volodymyr's Cathedral and was awarded the Order of Saint Anne for his work there. He became a full member of the Peredvizhniki in 1899 and was named an "Academician" in 1904. He also exhibited widely; winning a gold medal at the Salon in 1909 for his painting, "Gopak". It currently hangs in the Louvre.

Later, he temporarily fell out of favor with the Peredvizhniki when one of his paintings, "Going Home" was used (apparently without his permission) by the Shustov Vodka Company to promote their spotykach (a type of horilka). He was accused of having become "corrupted" and was forced to sue the company to have the image removed.

He died in 1912 after a short, serious illness. He was buried at the Lukyanivka Cemetery, Kyiv. His posthumous exhibition at the Academy of Arts, which took place in early 1913 featured 184 paintings, 419 sketches and 112 pencil drawings. In 1959, a street was named after him and, in 1997, a museum devoted to him was opened in Malyutyanka, a village where he painted during the summers, in the Kiev-Sviatoshyn Raion. Several of his works have alternate versions, often painted years apart.