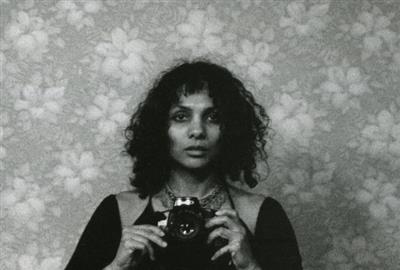 Ming Smith is an American photographer. She was the first African-American female photographer whose work was acquired by the Museum Of Modern Art in New York City.


Smith was born in Detroit, Michigan, and raised in Columbus, Ohio. After graduating from Howard University in 1973, she moved to New York City, where she found work modeling. While in New York she met photographer Anthony Barboza, who was an early influence.


Smith's approach to photography has included in-camera techniques such as playing with focus, darkroom techniques like double exposure, collage techniques and paint on prints. Her work is less engaged with documentation of events than with expression of experience. It has been described as surreal and ethereal, as the New York Times observed: "Her work, personal and expressive, draws from a number of artistic sources, preeminently surrealism. She has employed a range of surrealist techniques: photographing her subjects from oblique angles, shooting out of focus or through such atmospheric effects as fog and shadow, playing on unusual juxtapositions, even altering or painting over prints." Smith's early work was composed of photos that were shot quickly to produce elaborate scenes, and due to this process many of her photos have double dates. She has used the technique of hand-tinting in some of her work, notably her Transcendence series.


Some of Smith's work displayed in the Museum of Modern Art depicts motherhood in Harlem. These photos are taken using a documentary style way of photographing these subjects.


Smith has photographed many important black cultural figures during her career, including Alvin Ailey and Nina Simone. In 1973 Smith was featured in the first volume of the Black Photographers Annual, a publication closely affiliated with the Black Arts Movement of the 1960s and early 1970s. Smith had her first exhibition at Cinandre, a hairdressing salon, in 1973 as well. At Cinandre, she met Grace Jones, whom she photographed wearing a black and white tutu on occasion. Smith recalls that she and Jones would talk about surviving as black artists. Smith reflects on the memories by saying: "We came out of Jim Crow. And so just coming to New York and trying to be a model or anything was new." Two years later (1975), Smith became the first female member of the Harlem-based photography collective Kamoinge, under director Roy DeCarava. The Kamoinge Workshop was founded in New York in 1963 to support the work of black photographers in a field then dominated by white men. The collective, which still exists today, has undertaken a range of initiatives, including exhibitions, lectures, workshops, and the publishing of portfolios for distribution to museums. Smith participated with Kamoinge in three groups shows in New York and Guyana.


Smith dropped off a portfolio at the Museum of Modern Art (MOMA), where the receptionist mistook her for a messenger. When she returned, she was taken into the curator's office. Susan Kismaric named a price for Smith's work, which Smith declined due to the price not paying off her bills. Kismaric asked Smith to reconsider, which she eventually did. Shortly after, she became the first Black woman photographer to be included in the collections of the Museum of Modern Art (MOMA) in New York City. In addition to the MOMA, Smith's art has been featured at the Schomburg Center for Research in Black Culture and the Smithsonian Anacostia Museum & Center for African American History and Culture in Washington, D.C.