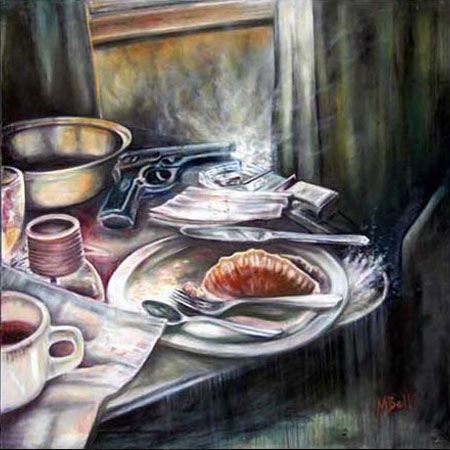 In "Ticket to Ride" Michael Bell created a cinematic painting series as a journey through one woman’s harrowing search for redemption, only nothing inspires redemption quite like revenge.

"Room Service" is the second of nine large-format mixed-media paintings that range from emotionally-driven portraits as allegories reminiscent of dramatic film-stills to dark, ambiguous hotel room scenes and metropolitan landscapes on 60" X 60" canvases overlaid with mixed-media subway maps painted into the background of each work.

Bell’s narrative strategy is for the viewer to question how much of Ticket to Ride is just a dream, and how much is rooted in reality. Its major movement is the journey taken by an Italian Femme Fetale that begins on a New York City subway platform in Scene 1, "The Transfer" as she awaits her metaphorical “train” and her journey continues -- painting by painting -- like a roller coaster ride through her mind.

In Scene 2, "Room Service" we enter a dimly lit hotel room with a smoking gun and lit cigarette positioned on a table next to a half-eaten breakfast at daybreak, suggesting a hitman as the second character introduced into this nine part narrative.