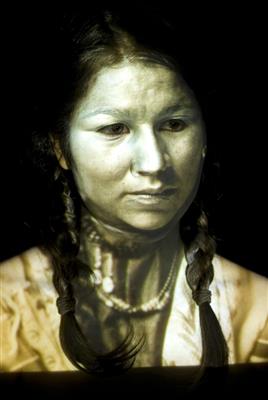 Meryl McMaster (born 1988, Ottawa, Ontario) is a Canadian and Plains Cree photographer whose best-known work explores her Indigenous heritage. McMaster frequently practices self-portraiture and portraiture to explore themes of First Nations peoples and cultural identity, and incorporates elements of performance and installation to preserve her mixed heritage and sites of cultural history in the Canadian landscape.


In her work, McMaster explores "tensions surrounding understanding one's personal identity and heritage, especially her own as a woman of Indigenous (Plains Cree) and European (British/Dutch) descent". She adopts a performative approach in which she blurs the boundaries between performance, sculpture, and photography by incorporating elaborate costumes and props in order to create staged images. McMaster considers these elements to be tools of personal transformation that become extensions of her body. McMaster's first major series, Ancestral from 2008, "appropriates ethnographic portraits, which she then projects onto her photographic subjects: herself and her father," noted artist and curator Gerald McMaster.


She makes use of such elaborate props in works such as Winged Callings (animal costumes) or Aphoristic Currents (collar "fashioned out of hundreds of twisted newspapers") in order to examine the tensions between cultural and personal memory as well as how they interact with imagination. Both works are part of her In-Between Worlds series (2010-2013). With regards to her artistic practice, McMaster states: "I'm really interested in exploring questions of our sense of self and how we really come to construct that sense of self through land and lineage, history and culture".


McMaster studied photography at the Ontario College of Art and Design University, graduating in 2010. The same year, she won the Canon Canada Prize, the Ontario College of Art and Design Medal in Photography as well as the Spoke Club Membership Prize and the Vistek Photography Award. In 2013 she was a recipient of the Eiteljorg Contemporary Art Fellowship and, in 2016, she was longlisted for the Sobey Art Award. In 2017, she was awarded the REVEAL Indigenous Art Award. In 2018, she was one of the three winners of the Scotia Bank New Generation Photography Award Other distinctions she received include the Charles Pachter Prize for Emerging Artists, and the Doris McCarthy Scholarship. In March 2018, she was named one of three inaugural winners of the New Generation Photography Award, which supports the careers of young artists working in lens-based media.