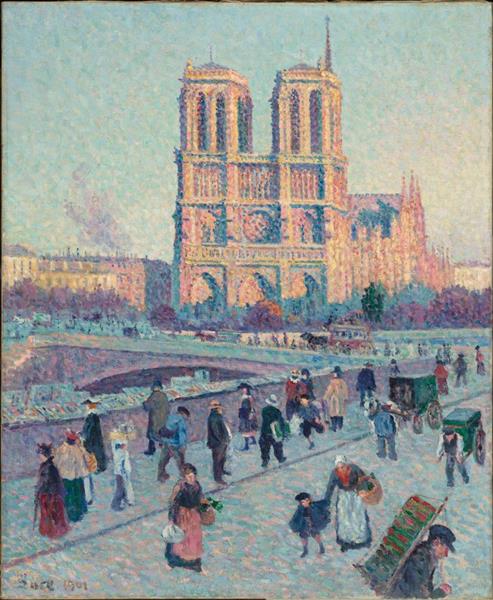 At the turn of the century, Maximilien Luce, who was part of the Neo-Impressionism movement between 1887 and 1897, used the technique of divisionism, separate dabs of colour, for one last time in about ten paintings of the cathedral of Notre-Dame de Paris, seen from the Saint-Michel embankment. It was a painting like this that provided the link between the painter's purely Neo-Impressionist period and his later Populist period.

In the centre of the painting the cathedral rises up, radiant in a range of warm tones, primarily oranges, pinks and reds, with bluish shadows made up of fine, juxtaposed brush strokes. The embankment and the bridge, plunged into shadow, are painted using broader brushstrokes, with sky blue, turquoise blue and purplish pink as the dominant tones.

Luce observes the passers-by: well-dressed bourgeois, servants carrying fruit and vegetables, a grandmother holding a child by the hand, and a baker's boy carrying his basket on his head. We can also see the stalls of the bouquinistes, a carriage with its blinds down, an omnibus, a trolley pulled by a man in shirtsleeves and waistcoat... the everyday life of the city. And towering over all this busy and ephemeral human activity stands the cathedral, a symbol of eternity.

The anecdotal aspect of this series by Luce is in stark contrast with the one Monet produced in 1892 and 1893, of Rouen cathedral, the cliff of stone, which is devoid of any human presence, and given up to the "drama of the light". Rather, we are reminded of the tradition of picturesque urban scenes represented by artists like Jean Béraud and Giuseppe De Nittis. But above all, it is the influence of his friend Camille Pissarro and his last series of views with their plunging perspectives over Paris that is evident in this work by Luce.