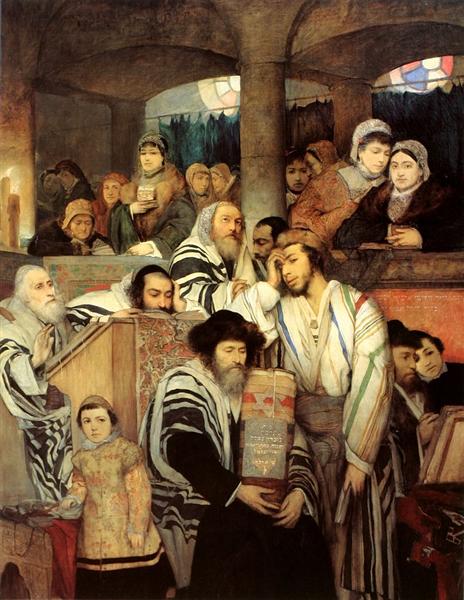 Jews Praying in the Synagogue on Yom Kippur

Maurycy Gottlieb made significant contributions towards creating the genre of Jewish Art. Gottlieb’s 1878 painting Jews Praying in the Synagogue on Yom Kippur exemplifies many artistic values that are significant to Eastern European Jews at the time and contains many deeper meanings about Gottlieb’s short life. The religious holiday of Yom Kippur (the holiest day of the Jewish year) is shown throughout this piece by the figures and symbolism. The color palette, location, human beings, and objects used all suggest a holiday of repentance and of importance. In this research paper, I will formally analyze the painting Jews Praying in the Synagogue on Yom Kippur, examine the context of the painting and how Gottlieb’s Jewish upbringing influences this work of art.

Yom Kippur is the Jewish holiday of repentance and is a time for the Jewish people to pray and repent for their sins. As Soussloff writes in Jewish Identity in Modern Art History, “Yom Kippur is also the occasion in the Jewish year when the dead are solemnly commemorated (in the service called Yizkor), and Gottlieb has injected into this picture several prominent self-memorials.” This piece shows the rabbi grasping the holy Torah (which contains the Old Testament); his expression is very somber and serious in keeping with the theme of the holiday they are observing. The location (a synagogue) is apropos considering the figures are observing the holiday of Yom Kippur. Gottlieb was a man who was proud of his Jewish heritage and wanted to show the world the religion and culture of Eastern European Jews. This painting was created on the days of atonement (preceding the day of Yom Kippur) but the setting of the piece is on the actual day of Yom Kippur. In his book Painting a People, Ezra Mendelsohn confirms that Gottlieb’s subject in this painting is the Days of Atonement: “Nathan Samuely, who discussed the work with Gottlieb in 1878, does specifically connect it, in his German essay on the artist published in 1885, with Yom Kippur, and informs us that the artist himself had the idea of painting it during the days of repentance preceding this holiday.” Not only does this piece show the observance of the specific holiday of Yom Kippur, but it also highlights the many differences of how Jewish people observe general holidays and how they dress in a unique fashion as opposed to gentiles.

Every figure in the synagogue has a serious look on their face. They could be listening to the rabbi’s sermon at the podium or reflecting upon their actions in the past year. It is very obvious they are in a place of prayer because of several objects placed in the temple and the way the figures are dressed. For example, many of the adult men are wearing talith (a holy cloth) and yarmulke’s (head coverings). These holy pieces of clothing are worn when praying in a synagogue. There is a Torah in the center of the composition, stained glass windows in the back, and candles on the top left. As Mendelsohn writes, “candles, at the left of the painting help provide the light.” The viewer can easily tell that the light is coming from the left of the painting which is where the candles are located. There is a quote/inscription on the wall that talks about the triumph of the Torah. All of these objects indicate that the paintings location is in a holy synagogue.