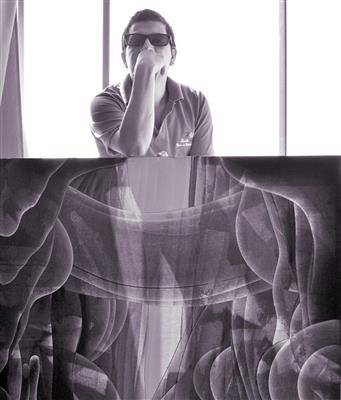 Self-taught artist Mauricio Paz Viola(b 1985; Carmelo, Uruguay) embarked on his artistic journey early in life. Dabbling in plastic art since 7, he has participated in various art competitions in his native Uruguay and abroad. At 14, Paz Viola began to participate in group shows and individual shows nationally and internationally in galleries and museums in Uruguay, Argentina, Chile, United States, Italy, among others.
The most notable influences of Paz Viola are Roberto Matta, Maurits Cornelis Escher, Joan Miró, Vasili Kandinski, Max Ernst and Javier Gil.

Critic's Notes
Ontological concepts, jubilant style and instinct make a magical mix in the works of Mauricio Paz Viola, creating visual images secure in their aesthetic expression, and marvelously incisive for the viewer ... terrific for those who are fond of introspection.

The works of Paz Viola alludes to the hidden charm of the abstraction to the point of almost subordinating all conceptual speculation to genuine emotional experiences, a proposal typical of any authentic art where aesthetics are at play with our senses. In his works - extensive, powerful color schemes in preliminary states, covering the canvas in an organic manner, with a rhythm as if animated by the compositional force that sprung from the bond between the artist and the Universe. I would say that even more significant is the visual materialization of the dialogue between the existential author that delves into the profound consciousness of origin.

If there were a way in which Paz Viola connects with art, it would be reflection, with his own techniques - which is why his visual language takes us directly to the core of his works and transforming them into purely symbolic elements. Nevertheless, the artist seems to be taking away from using a story or taking the reins of narrative, retaining on the canvas only what is perpetual, infinite and what speaks for itself ...

I believe that the magnitude of images reflect the artist's creative and cognitive will, and an example of this would be the series "Nothing in the Void" where the author expands on the extreme idea of a kind of meaning where the human-universe duality dissolves in the immenseness Presented with a subtle touch of personal nostalgia, the series nevertheless features explosions of color and spaces, enticing the viewer in an intense, limitless realm while striking music in their heartstrings.

Mauricio Paz Viola proposes a new approach to contemporary art through fantastical images of his own ideation, creating a wondrous landscape that invites imagination, physical and psychic, organic metaphors in virtual, ethereal and luminous worlds with a lyrical, person graphology like few are able to , In order to strive for perfection in beauty which springs from his inner cosmos.

The creative impulse is palpable all over the canvas, in its transparencies, its persistent yet innovative propositions of its own world, which opens to us through his writing, which is painting and drawing at the same time and masterfully and spontaneously conveys his cosmos, transforming The viewer into silent witnesses to a world where time loses its relevance and shapes indefinitely regenerate, becoming permanent movements in the eyes of observers.

Paz Viola eludes to straight-forward interpretation: rather, I have defined his own landscape, articulating new horizons of joyful inspiration, with singular effects of light and shade, of dreamy colors in their textures and shapes. Henceforth, Paz Viola reveals his anxiety as an artist and a human being - anxious to reveal his self, while his work appears as a fragment of a unique composition, an element of his secret intention to reveal the inner world of his imagination which Nourishes his creations.

The colors used by Paz Viola are not colors of the nature. Rather, they are invented, perhaps to generate uncanny visions of his dreams and his poetic wanderings: lights and sparks shining out of blue and orange, luring views to dabble in the world of Paz Viola ... unexpected radiance that takes views to the realms of magic , To an imagined and fabulous world sustained by masterfully wrought colors, in a state of constant change and creation, shapes that interlace and reinvent themselves, mixing colors, giving birth to new volumes, ebullient of perfect transparency and light.

Paz Viola presents a dynamic and incandescent landscape, which is deeply personal with an unequivocal singularity and originality, in which his works as a young artist and creator. While years will add to his mastery which is already evident, and will surely travel new paths towards new possibilities of wonder.

It is difficult to overlook his work: viewers are inevitably drawn to behold them, to enter them and be carried away by the artist's way of seeing and seeing - which alone can testify to its value the plastic expression. It is impossible not to explore the hidden nooks and corners and find them lights and shadows. Inertia has no place in his work, and monotony is nonexistent: with multiplied visual realms, of which each is a landscape, a vision, and all come together and form a parable - familiar, friendly, speaking to us in another tongue, in a Unique language of Paz Viola.

The vibrant lines elevate shapes and colors to glory, with magic transpiring from all his creations - an epic magic that lends itself to the movement of shapes and the vitality and transparency of color. Paz Viola blazes his own trail: he is his own influence, and therein lies the litmus proof of his weight as an artist. The spatiality in his paintings mark the beginning of the viewer's journey, while his impeccable techniques grips observers till the end of their artistic musings.

Paz Viola has a remarkable sensitivity with colors, and his paintings lay bare the depth and sensuality of his highly original textures that have broken free from conventions ... Peace Viola gifts us with his existential mystique in every brush, weaving fantasies that dance between the familiar and The unknown, opening new dimensions through his canvas wormholes ... Peace Viola shows a fresh path in a creative cosmos that exists only in his spirit and subconsciousness. From such intimate space are born his creations, which grow, change and multiple towards perfection.

Paz Viola is a good example of mediums at the service of ideas, of his unwavering horizons, of his colors - pink, orange, saturated or translucent, transfiguring in dark puzzles or luminous sparkles - like an x-ray of his imagination, of his Spirit

Emerging gracefully out of his experimental audacity, Paz Viola seeks in the other than representing his genuine essence as a human being and an artist through his intimate and distinctive touch.

Nothing in the Void consists of interpretations of subjective and illusory images inspired by the author's sensations and memories:

There is a planet called Ergon, far, away from our solar system and found in the first order of light of creation at the distance from us, in one of the many universes of the first order, created by the highest , the absolute unity, or God.

On this planet thrives to hostile ecology, full of constant danger for their dwellers. In the nature full of extraordinarily shaped (almost shapeless) things are composed of pure matters and a divine, almost perfect energy, which live in endless battle with one another.
Ergonomicism arises out of the dialectic juxtoposition of "ergon" (energy) and realism (reality, of being real), and refers to that is energy and movement in reality, which is then captured and rendered through images, landscapes, flows, matters , beings, etc in an dream-like world created by the author.

One of the key features of these images is that they reflect light, energy, vitality as well as constant movements and vibrations. There are multiple forms of expression - lines, points, repetitions of large shapes that cross each other, mix together, move and move into one another, creating new shapes and images, as if each has a life of its own