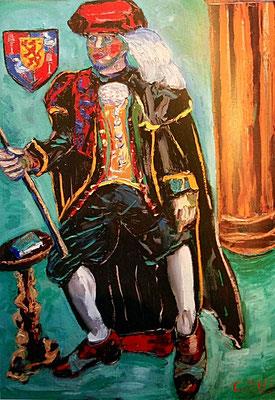 
Matthias Laurenz Gräff was born into an Austrian family of several artists. He is the child of Helmuth Gräff, an academic painter, and Martina Maria Gräff (née Gach), art professor at Vienna's Sacre Coeur, daughter of the architect Richard Gach and granddaughter of the chemist Richard Henke.


At the age of 17 Matthias Laurenz Gräff began to study illustration and graphic at the private New Design University St. Pölten, and in the following years he took part at the summer academy of Geras of Bernhard Hollemann and Arthur Redhead. From 2002-08 he studied at Wolfgang Herzig's masterclass of painting at the University of Applied Arts Vienna.


In 2010, at the 64th annual fair of St Pöltens Künstlerbund (Art union), he received the "Adolf Peschek Preis" (Adolf Peschek Public Award) in the Museum of the City of St. Pölten. Two years later Gräff created the painting for the vine etiquette of the Red Cross in Lower Austria. In 2013 he and his girlfriend Georgia Kazantzidu organized a concert of the Mojo Blues Band in his own hometown, Gars am Kamp. In the same year, upon the occasion of the celebration of the sister city Gars am Inn in Germany he created the officiel twin city painting. The same year Gräff became a Co-founder of the worldwide Graeff-family association (Familienverband Gräff-Graeff e.V.), and in the following year he organized the worldwide family reunion "530 Jahre Graeff" at the ancient Von Graben castle Kornberg, Styria.


In 2015 and 2017, Gräff organized artist meetings with Nick Simper and Don Airey, musiciens of Deep Purple in Vienna. In the same year together with Roger Glover he take part at "50 Years Deep Purple. Art and History" at Cologne.


Gräff and his Greek-born girlfriend, Georgia Kazantzidu, are involved in the Austrian-Greek cultural exchange of Vienna. In 2015 he organized an exhibition for the Austrian-Greek community in the "Embassy districy of Vienna". In 2018 he gave an interview and a presentation about his work and life to Irene Gavala at the Greek radio station Poets radio.


Since 2015 Gräff is also working on time policy and social criticism paintings, which get multiple used by national and international political magazines and blogs such as the US-American The Armenian Weekly and A Washington Babylon, the European eurojournalist.eu, the Israel-German haolam.de, the Italian Treccani, the German Die Achse des Guten (Ramin Peymani) (Peter Grimm) and other columnists, the Austrian hephaestuswien.com (Heinz Gstrein), and Unzensuriert.at, the Swiss Untergrund blättle and the German Demokratisch - Links. Kritische Internet-Zeitung. Some of his paintings were also published in political books.