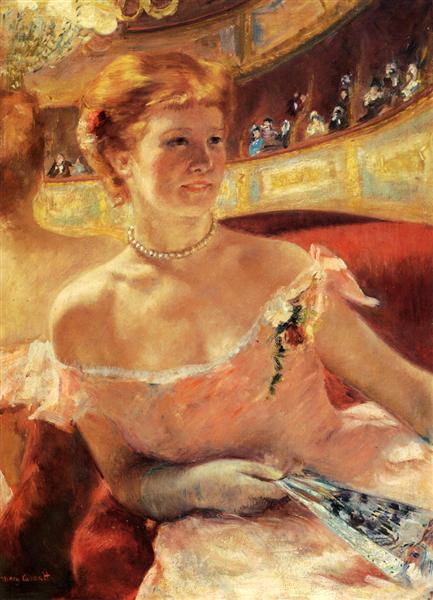 Woman with a Pearl Necklace

Woman with a Pearl Necklace in a Loge (or Lydia in a Loge) is an 1879 painting by American artist Mary Cassatt. The Philadelphia Museum of Art acquired the painting in 1978 from the bequest of Charlotte Dorrance Wright. The style in which it was painted and the depiction of shifting light and color was influenced by Impressionism. This painting shows a view of the modern woman and is similar in style to Degas.

This oil on canvas painting is 32 x 23 1/2 inches (81.3 x 59.7 cm). The painting shows a woman sitting on a large red chair in the balconies of the Paris Opéra House. The figure is seated in front of a massive mirror that is reflecting the theater scene that the woman is experiencing; it is also giving us the view point that the woman is having. As with Degas, Cassatt paid close attention to the "effects of artificial lighting on flesh tones". The woman is sitting enjoying the sights, the city nightlife that most Impressionists were fascinated with, as she people watches. She is dressed up, as with what was expected of going to a theater, with a peach colored dress, makeup, pearls, gloves and hair pinned back. She is holding a fan and a flower is attached to the bodice of the dress. She looks bemused with what she is seeing. The quick painterly style of Impressionist paintings can be seen here as Cassatt was heavily inspired by it. The background is very gestural and loose as people are carved out in simple brush marks of color. An elaborate chandelier is also shown in the reflection of the mirror. The rich colors of the painting draw the viewer in, deep shadows create contrast against the brightness of the light source. The brush strokes within the dress itself give a texture to it and a liveliness to the piece. The view in which the viewer is given brings an intimacy to the painting, making as though the viewer is there with the woman as she enjoys her evening.

This painting shows the modern woman because it is not showing a piece for the male gaze. This piece is more about the woman than it is about the viewer. She is shown to be enjoying herself and is neither seductive nor nude. It is depicting an average night out in Paris and humanizing women in ways that male artists had not explored. Being a genre painter she was able to reproduce scenes of everyday life, domestic settings and parties, which she would romanticize to help create an ethereal air of wonder around the women she painted.

Besides the quick brush strokes that was indicative of Impressionist paintings, Cassatt also implemented the tipped perspective that was common in many of Degas' paintings. This caused the viewers to never be quite able to figure out where in the painting they would be standing if they were present in that scene.

Cassatt depicted the modern woman, giving her an elegance and beauty. "There is nothing more graciously honest and aristocratic than her portraits of young women". "Glamour, fashionable costume, exquisitely tasteful settings served to create an idea that was understood to be intensely modern, a pale legacy of the poet". She painted women of the emerging middle/upper class engaged in leisure activities such as attending the theater. Because of this she is considered a Realist because of her portrayal of women in daily lives, such as working women or women of leisure. The way in which she depicted the working class woman in "maternal solicitude or personal anxiety are framed within" these narratives. She was also considered to be a Post-Impressionist.

Please note that this particular artwork might not be on view when you visit. Don’t worry—we have plenty of exhibitions for you to explore.