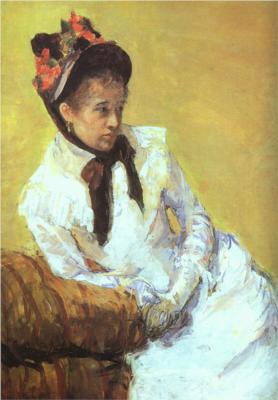 An American painter and printmaker, Mary Cassatt was an impressionist painter, who depicted the lives of women, especially the special bond between mother and child. She traveled extensively as a child, and was probably exposed to the works of the great masters at the World’s fair in Paris in 1855. Other artist’s, such as Degas and Pissarro, would later become her mentors and fellow painters. She began studying art seriously at the age of 15, at a time when only around twenty percent of all arts students were female. Unlike many of the other female students, she was determined to make art her career, rather than just a social skill. She was disappointed at her art education in the United States, and moved to Paris to study art under private tutors in Paris. Her mother and family friends traveled with her to France, acting as chaperones.

She continued her art education in France, and her first work was accepted into the Paris Salon in 1868. At the outbreak of the Franco-Prussian War in 1870, however, she returned to the United States to live with her family. Her father, who did not approve of her chosen vocation as an artist, paid for her living expenses, but refused to pay for her art supplies. During her stay in the United States, Cassatt was miserable. She exhibited some paintings but found no buyers, and upset at the lack of art to study, she quit painting and almost gave up the craft. After a trip to Chicago, her work was noticed by the Archbishop of Pittsburgh, who commissioned from her a copy of two of Correggio’s paintings in Italy. He offered to pay for her travel expenses and she immediately left the United States.

In Europe, Cassatt’s paintings were better received, increasing her prospects, and exhibited in the Salon of 1872, selling a painting. She exhibited every year at the Paris Salon until 1877, when all her works were rejected. Distraught at her rejection, she turned to the Impressionists, who welcomed her with welcome arms.

Deciding early in her career that marriage was not an option, Cassatt never married, and spent much of her time with her sister Lydia, until her death in 1882, which left Mary unable to work for a short time. As her career progressed, her critical reputation grew, and she was often touted, along with Degas, as the one of the best exhibitors at the Impressionist Salon. She was awarded the French Legion of Honor in 1906.

In her later life, she was diagnosed with rheumatism, neuralgia, diabetes, and cataracts, although her spirit was never crushed. She continued to fight for the cause of women’s suffrage after she went almost blind in 1914. She died twelve years later. He works have since been printed on United States postage stamps and her works have sold for as much as $2.9 million at auction.

Mary Stevenson Cassatt (/kəˈsæt/; May 22, 1844 – June 14, 1926) was an American painter and printmaker. She was born in Pennsylvania, but lived much of her adult life in France, where she first befriended Edgar Degas and later exhibited among the Impressionists. Cassatt often created images of the social and private lives of women, with particular emphasis on the intimate bonds between mothers and children.

She was described by Gustave Geffroy in 1894 as one of "les trois grandes dames" of Impressionism alongside Marie Bracquemond and Berthe Morisot.

Cassatt was born in Allegheny City, Pennsylvania, which is now part of Pittsburgh. She was born into an upper-middle-class family: Her father, Robert Simpson Cassat (later Cassatt), was a successful stockbroker and land speculator. He was descended from the French Huguenot Jacques Cossart, who came to New Amsterdam in 1662. Her mother, Katherine Kelso Johnston, came from a banking family. Katherine Cassatt, educated and well-read, had a profound influence on her daughter. To that effect, Cassatt's lifelong friend Louisine Havemeyer wrote in her memoirs: "Anyone who had the privilege of knowing Mary Cassatt's mother would know at once that it was from her and her alone that [Mary] inherited her ability." The ancestral name had been Cossart. A distant cousin of artist Robert Henri, Cassatt was one of seven children, of whom two died in infancy. One brother, Alexander Johnston Cassatt, later became president of the Pennsylvania Railroad. The family moved eastward, first to Lancaster, Pennsylvania, then to the Philadelphia area, where she started her schooling at the age of six.

Cassatt grew up in an environment that viewed travel as integral to education; she spent five years in Europe and visited many of the capitals, including London, Paris, and Berlin. While abroad she learned German and French and had her first lessons in drawing and music. It is likely that her first exposure to French artists Jean Auguste Dominique Ingres, Eugène Delacroix, Camille Corot, and Gustave Courbet was at the Paris World’s Fair of 1855. Also in the exhibition were Edgar Degas and Camille Pissarro, both of whom were later her colleagues and mentors.

Though her family objected to her becoming a professional artist, Cassatt began studying painting at the Pennsylvania Academy of the Fine Arts in Philadelphia at the early age of 15. Part of her parents' concern may have been Cassatt's exposure to feminist ideas and the bohemian behavior of some of the male students. As such, Cassatt and her network of friends were lifelong advocates of equal rights for the sexes. Although about 20 percent of the students were female, most viewed art as a socially valuable skill; few of them were determined, as Cassatt was, to make art their career. She continued her studies from 1861 through 1865, the duration of the American Civil War. Among her fellow students was Thomas Eakins, later the controversial director of the Academy.

Impatient with the slow pace of instruction and the patronizing attitude of the male students and teachers, she decided to study the old masters on her own. She later said, "There was no teaching" at the Academy. Female students could not use live models, until somewhat later, and the principal training was primarily drawing from casts.