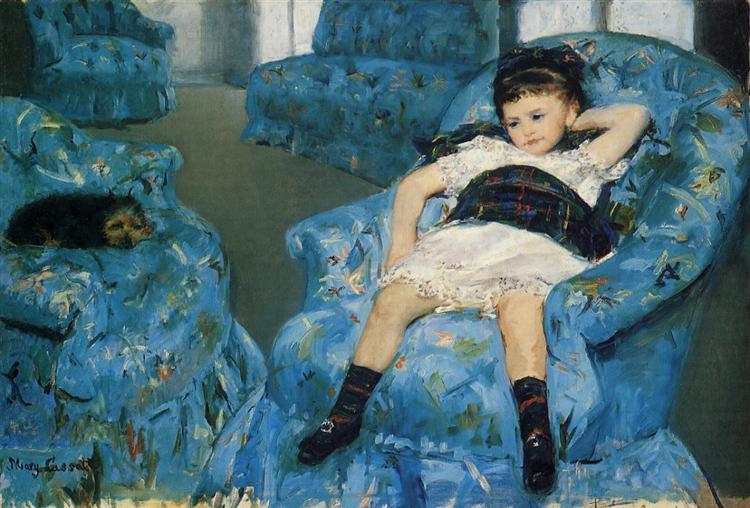 Little Girl in a Blue Armchair

Little Girl in a Blue Armchair (French: Petite fille dans un fauteuil bleu) is an 1878 oil painting by the American painter, printmaker, pastelist, and connoisseur Mary Cassatt. It is in the collection of the National Gallery of Art, Washington D.C. Edgar Degas made some changes in the painting.

The museum page provenance suggests the painting was possibly shown at the Fourth Impressionist Exhibition 1879 as Portrait de petite fille.

By 1877 Cassatt had come into frank conflict with the official French art establishment and had had both her submissions for that year rejected by the Salon. So when Edgar Degas invited her to join the Impressionists the same year, a group similarly disaffected by the Salon system, she accepted with alacrity. A planned 1878 exhibition did not take place, because of what Degas judged would be competition from the World's Fair held in Paris that year, but she did hold what amounted to a show of her own at the Spring 1879 Impressionist exhibition, exhibiting a dozen oils and pastels. Exactly which works these all were is not now known with certainty, but it is likely that Little Girl in a Blue Armchair was amongst them.

Cassatt submitted the painting to the Art Gallery of the American pavilion at the 1878 World's Fair, along with another that cannot now be identified. To her intense annoyance it was rejected, although the other was accepted. She expressed her irritation in a 1903 letter to the Parisian art dealer Ambroise Vollard, which makes it plain how much Degas had been involved (he also supplied the model, a daughter of friends of his): "It was the portrait of a friend of M. Degas. I had done the child in the armchair and he found it good and advised me on the background and he even worked on it. I sent it to the American section of the big exposition [of 1878], they refused it ... I was furious, all the more so since he had worked on it. At that time this appeared new and the jury consisted of three people of which one was a pharmacist!" Indeed, the painting is often cited as an example of Degas' influence.

Recent cleaning and infra-red photography at the National Gallery of Art has confirmed Degas' contribution.

The painting is described as "it dazzles with its predominant hue of deep turquoise" and has been regarded to be a masterpiece by Karen Rosenberg in a New York Times review.

The dog pictured lying in the armchair next the little girl's in Little Girl in a Blue Armchair is a Brussels Griffon. Cassatt was probably introduced to this breed while in Antwerp 1873. Degas presented her with a pup he had procured from fellow Impressionist Ludovic-Napoléon Lepic, a dog lover who bred them, and Cassatt went on to keep them the rest of her life. The painting was purchased from the artist by Amboise Vollard of Paris, and was later acquired by Hector Brame of Paris. It was sold in 1963 to Mr. and Mrs. Paul Mellon. They lent it to the National Gallery of Art for exhibitions and eventually gifted it in 1983 to NGA.