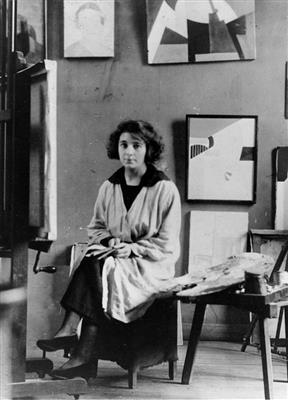 Marthe Donas (26 October 1885 – 31 January 1967) was a Belgian abstract and cubist painter and is recognized as one of the leading figures of Modernism. Donas worked under the androgynous pseudonyms Tour d'Onasky, Tour Donas and M. Donas.


Born on 26 October 1885, Marthe Gabrielle Donas grew up in Antwerp as the daughter of a prosperous French-speaking bourgeois family. On her own initiative, she enrolled at the Royal Academy of Fine Arts Antwerp at the age of seventeen. Her authoritarian father, however, did not support her wish to become a painter, preventing her from going to drawing class and exhibitions and would not allow her being in contact with other students and artists in Antwerp. Donas´ paintings at that time were confined to still lifes and portraits of her family and friend circle. Against her father's will, she re-enrolled at the Higher Institute of Fine Arts in 1912 following the course for young ladies with Frans Van Kuyck.


After the breakout of the First World War and the German invasion of Belgium, 4 August 1914, the Donas family fled to Goes, Netherlands. Soon after, Donas freed herself from the family pressure and moved with one of her sisters to Dublin. There, she continued perfecting her drawing, painting and print-making skills and followed a course in stained-glass art. At the end of 1915, she was taken on at Sarah Purser´s stained-glass art studio An Tur Gloine where she produced three large stained-glass windows for churches as well as some smaller works. Due to the political events surrounding the Easter Rising in Dublin in 1916, she once again was forced to leave her place of residence. While her sister sailed back to the family to the Netherlands, Marthe decided not to return to her old life but to head for Paris instead, at the time the artistic centre of Europe.


She settled in Montparnasse at the end of 1916 and rented a studio in a large complex at 9 Rue Campagne Première. It was in Paris where she got into touch with the latest artistic màovements. She continued her education at the Académies de la Grande Chaumière and Ranson. In January 1917 she discovered the work of André Lhote and Cubism, which left a deep impression on her. Donas soon became Lhote's pupil and started to adapt a cubist style in her own paintings.


Due to her precarious financial situation Donas accepted the offer of an aristocratic lady to join her to the South of France in exchange for painting lessons. In spring 1917 she moved to Nice where she met the Ukrainian sculptor Alexander Archipenko. They developed not only an intensive collaboration in their artistic work but also an intimate personal relationship. Donas' paintings and drawings of that time show how skilfully she incorporated elements of Archipenko's sculpto-paintings in a highly personal way. She then worked fully in a cubist manner, further developing her remarkable sense of colour under Archipenko's influence. Her most recurring motive was the female figure and still lives. By including concave and convex forms, alternating between round, angular and blurred elements, she introduced energy and investigated movement in her paintings which became more and more abstract. Already in Paris, she had experimented with collage techniques, but in Nice regularly incorporated materials like cement, sand, different kinds of fabric and lace, sandpaper and wallpapers into her work.