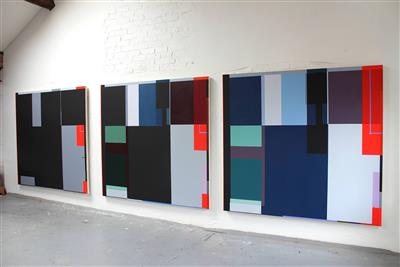 Mark Sibley was born in the central English town of Northampton, UK in 1976. He was educated at the University of Northampton, and later at Wimbledon College of Art in London, UK. He is currently an associate lecturer, and co - founder of Albus 3 Arts, an artist led studio and exhibition organisation.

His work investigates the location of painting art practice in relation to the internet, specifically when functionality becomes error.

"Mark Sibley and his work are full of questions, questions that there aren’t necessarily answers to, at least as far as I can tell. And yet the questions, like his work, consistently work away at any answers. Out of all the problems a sense of continuity is created, along with the feeling that this continuity itself is perhaps found in a world of unanswerable glitches. Painting thus represented becomes a funny old world born anew, bright and illuminating. He had had a show of his digital paintings in Bletchley Park. Steeped in a kind of museum of preserved thought I would have liked to have seen them there and imagine that their careful immediacy would have served as a bright complementary energy to that pickled and organised 1940s horizon; a resonant experience of conjoined disciplines; of different languages and their dreamings and struggles. This sense of purpose working within larger creative horizons defines the experience of Mark's paintings for me, a sense of history and its opposite, of representation and escape. The matter of factuality of the museum baits a novelistic imaginary response and I can imagine the windmills that we now orbit awkwardly in his studio crystallising there amongst the dusty valves and rough algorithms at the very birthing suite of computing itself. But Mark and his paintings have a knack of reminding me that these are merely my own errant flights of fancy opening onto his endless questions: Is he taking a well-established order and finding his own path, or subverting it slightly? Is it celebratory or slightly mocking or both or neither?" ( From Turps Banana article - On Getting Lost:  Phil King, Mark Sibley and
Mark Sibley’s Paintings, by Phil King.)