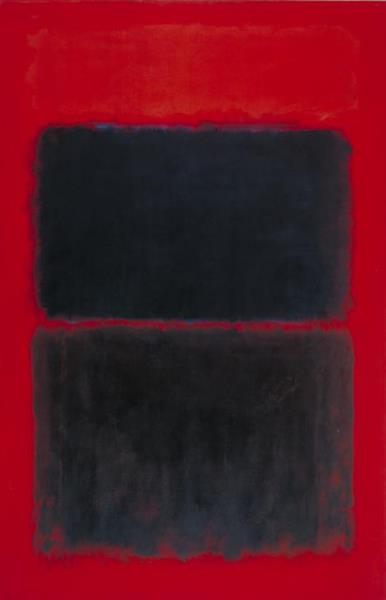 The large oil painting, Light Red Over Black (1957) (230x152 cm), is an example of the color field paintings created by Mark Rothko in the 1950s. The painting was part of the US Pavilion at the 29th Venice Biennale in 1958 and was acquired the following year by the Tate Museum in London. Earlier color field paintings like White Center (Yellow, Pink, and Lavender on Rose) (1950) and No.5/No.22 (1949-1950) are recognizable by the artist’s use of bright and vibrant colors. However, from the second half of the 1950s, his palette darkened, and the paintings became more muted and somber. In these darker works like Light Red Over Black, Rothko explored the interplay between light and depth.

Light Red Over Black was created on a single sheet of tightly stretched cotton duck canvas. According to his son, Christopher Rothko, the artist would often prop up the canvas on blocks, and then climb a ladder to paint the canvas. Initially, Rothko primed the canvas with a coat base of red that mixed powder pigments with rabbit skin glue. This treatment would give the painting a greater illusion of depth. The second layer was purposefully a thin coat of paint. Sometimes, Rothko would paint thin coats of multiple colors to allow these different tones to shine through subtly. After that, Rothko began painting the rectangles, by once again layering different colors. In Light Red Over Black, the two black rectangles have a base of blues and blacks that create hazy forms and give the canvas a greater sense of depth and dynamism. The areas of black paint were sparsely applied, leaving a vivid scarlet blue border, which stands out against the red background. The top rectangle was densely painted, while the bottom rectangle the paint was applied thinly and loosely, allowing some of the red to show through. Rothko softened the rectangle edges, leaving visible traces of his brushwork and emphasizing the painterly quality of Light Red Over Black. Even though it appears Rothko painted at a rapid pace, he would take time between the different stages of the painting to look at the canvas and contemplate the composition and overall appearance of the painting.

In his paintings, Rothko wanted to express human emotions as well as the essential and universal characteristics of the natural world. Here Rothko kept with the tradition of 19th-century Romantic painters J.M.W Turner and Caspar David Friedrich, who strived to express these ideas by painting awe-inspiring landscapes. However, Rothko and other Abstract Expressionists abandoned figurative painting because they felt it could not adequately express the spiritual and the emotional essence of the world. Although his abstract paintings were compared to works of Neoplasticist artists like Piet Mondrian, Rothko’s abstraction took it a step further. Mondrian’s abstract paintings have a reference in the natural world, while Rothko’s paintings were not tied to any particular optical phenomena. Rothko wanted the viewer to meditate and explore his large canvases, to come close to the painting and become enveloped in it. For Rothko, his color combination and composition were a way of communicating human emotion and echoing the human experience to the viewer.