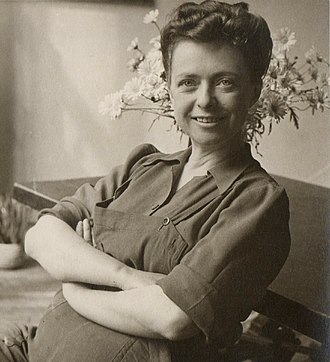 Marie-Thérèse Auffray (11 October 1912 – 27 September 1990) was a French painter and fighter in the French Resistance during World War II. She began her career in the 14th arrondissement of Paris and was known for her expressionist works. She remained independent of the art market, whose mercantile codes she always rejected.


Attached to her native Brittany, Auffray nevertheless left Saint-Quay-Portrieux at a young age, setting off for Paris in 1920, upon the death of her father. Very gifted at the arts, she quickly joined the world of artists that settled in Paris during the Années folles and attended the workshops at 11 rue d'Alésia, in the 14th arrondissement.


Auffray was noted for her talent as a poster artist and illustrator, but also for her paintings (still lifes and portraits). She moves into her own workshop at 21 rue Gazan in 1942, continuing to frequent the galleries in the nearby rue d'Alésia. Her Parisian life was mainly spent in the Parc Montsouris district, which has always welcomed artists and their workshops.


From the start of World War II, she joined the French Resistance, moving to Echauffour where she joined forces with another young resistant, Noëlle Guillou, her partner in life. As major figures of the Echauffour Resistance, they supplied Parisian resistance fighters with local produce from Normandy and are illustrated in heroic actions. Marie-Thérèse Auffray also saved Allied paratroopers, including the American aviator Arnold Pederson, for which U.S. President Dwight D. Eisenhower paid tribute to her.


In 1945, Auffray exhibited at the Galerie Drouant-David and the Galerie Lucy Krohg, in Paris. In 1947, she and Noëlle Guillou opened Le Bateau Ivre ("The Drunken Boat"), an atypical inn, book-shop and discotheque in Normandy. The name of this place is a pun, relationed to the bar she made herself in form of boat, remembering her origins from Brittany, and the famous poem "Le Bateau ivre" by French poet Arthur Rimbaud.


Auffray shared her life between Echauffour and Paris, where she retained her workshop in the 14th arrondissement and as "Painter of the Social Comedy", she continued to paint all her life.


Her works were dispersed after her death, but, since the 2000s, Association MTA (acronym of its name) contributed to its rediscovery with several retrospectives recently devoted to Auffray: in 2016 (in Échauffour), in 2017 (in Paris, Orangerie du Sénat), and in 2018 (in Saint-Quay-Portrieux and Alençon).