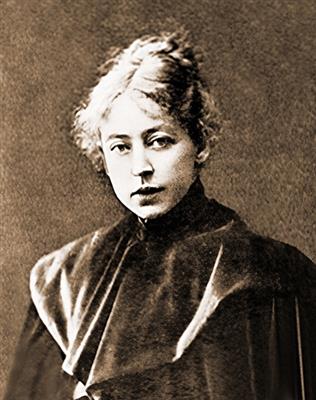 
Yakunchikova was born in Wiesbaden, Germany in a prosperous industrialist family, and grew up in Moscow. Her family was very musical: her father, Vasily Ivanovich, was an expert at the violin, while her mother, Zinaida, played the pianoforte. Indeed, her father sponsored the construction of the Moscow Conservatory.


Yakunchikova's own interests, however, turned towards the fine arts. In 1882, following her sister Natalya's marriage to the landscape artist Vasily Polenov, his sister - Elena Polenova - also a fine artist, became a close friend. The Polenov residence was to become an important training centre for budding artists, and Yakunchikova joined as well, taking evening lessons with Elena between 1886 and 1889. Here she met artists such as Isaac Levitan, Valentin Serov, Mikhail Nesterov and Konstantin Korovin, among others.


Beginning in 1883 she had private lessons in art with N. A. Martynov, and from 1885 she studied as an external student at the Moscow School of Painting, Sculpture and Architecture.


In 1896, she married a doctor named Leon Weber-Bauler, who was studying at the Sorbonne at the time, and attached his name to hers from then until her death. Their first son, Stepan, was born in 1898.


Yakunchikova was associated with the Abramtsevo artists, especially her teacher Elena Polenova, whose revival of traditional handicrafts inspired her to embroider and to execute pokerwork. Between 1887 and 1889 she began to collect folk art.


Landscape art remained her favourite genre, having been inspired to plein air painting by Polenova.


Yakunchikova traveled to Austria and Italy in 1888; the following year she went to France and Germany, and from then on worked mainly in western Europe. From 1889 to 1890 she attended the Académie Julian in Paris, studying under William-Adolphe Bouguereau and Tony Robert-Fleury. Here she painted natural scenes, and later exhibited at the Salon de Champ-de-Mars. She remained in Paris throughout the 1890s, except for occasional trips to Russia to recuperate and gain inspiration for her work.


Yakunchikova can easily be considered the first Russian artist of her generation to organically meld into the European context; her cityscapes of Versailles and Paris are considerably earlier than the more famous ones of Alexandre Benois. Further, her cityscape Paris: Avenue Wagram and the Arc de Triomphe at Dusk (1892) romantically depicts the city under artificial lights, and anticipates Konstantin Korovin's famous cycle of paintings of the city by night and day.


In 1892 she began to create colored etchings. She also started off with the technique of burning of wooden panels, which could then be illuminated by oil paint.


In 1897 Yakunchikova began to illustrate books. The following year onwards she also designed textiles and toys. Also in 1898 she was commissioned by Serge Diaghilev to design a cover for his magazine Mir iskusstva; this was an Art Nouveau image, with folk art stylings, of a swan in a forest pool, and ran in 1899.