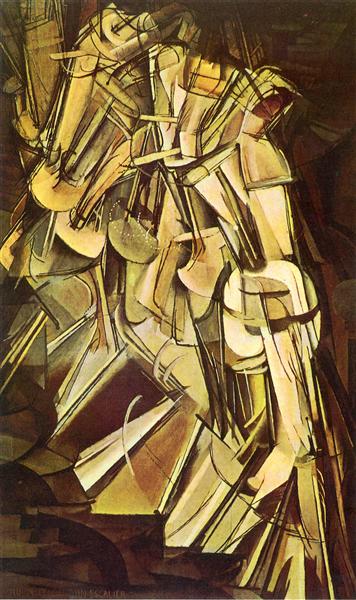 Nude Descending a Staircase, No.2

Nude Descending a Staircase, No. 2 (French: Nu descendant un escalier n° 2) is a 1912 painting by Marcel Duchamp. The work is widely regarded as a Modernist classic and has become one of the most famous of its time. Before its first presentation at the Parisian 1912 Salon des Indépendants, it was rejected by the Cubists as too Futurist. Yet the work was exhibited with the same group at Galeries J. Dalmau, Exposició d'Art Cubista, in Barcelona, 20 April–10 May 1912, and subsequently caused a huge stir during its exhibition at the 1913 Armory Show in New York. The painting was reproduced in Les Peintres Cubistes, Méditations Esthétiques by Guillaume Apollinaire, published in 1913. Nude Descending a Staircase is in the Louise and Walter Arensberg Collection of the Philadelphia Museum of Art.

The work, an oil painting on canvas with dimensions of 147 cm × 89.2 cm (57.9 in × 35.1 in) in portrait, seemingly depicts a figure demonstrating an abstract movement in its ochres and browns. The discernible "body parts" of the figure are composed of nested, conical and cylindrical abstract elements, assembled together in such a way as to suggest rhythm and convey the movement of the figure merging into itself. Dark outlines limit the contours of the body while serving as motion lines that emphasize the dynamics of the moving figure, while the accented arcs of the dotted lines seem to suggest a thrusting pelvic motion. The movement seems to be rotated counterclockwise from the upper left to the lower right corner, where the gradient of the apparently frozen sequence corresponding to the bottom right to top left dark, respectively, becomes more transparent, the fading of which is apparently intended to simulate the "older" section. At the edges of the picture, the steps are indicated in darker colors. The center of the image is an amalgam of light and dark, that becomes more piqued approaching the edges. The overall warm, monochrome bright palette ranges from yellow ochre to dark, almost black tones. The colors are translucent. At the bottom left Duchamp placed the title "NU DESCENDANT UN ESCALIER" in block letters, which may or may not be related to the work. The question of whether the figure represents a human body remains unanswered; the figure provides no clues to its age, individuality, or character, while the gender of "nu" is male.

The painting combines elements of both the Cubist and Futurist movements. In the composition, Duchamp depicts motion by successive superimposed images, similar to stroboscopic motion photography. Duchamp also recognized the influence of the stop-motion photography of Étienne-Jules Marey, particularly Muybridge's Woman Walking Downstairs from his 1887 picture series, published as The Human Figure in Motion.

Duchamp submitted the work to appear with the Cubists at the 28th exhibition of the Société des Artistes Indépendants, Paris, 25 March through 16 May 1912. It appeared under the number 1001 of the catalogue, entitled simply Nu descendant l'escalier, not Nu descendant un escalier n° 2. This catalogue revealed the title of the painting to the general public for the first time, even though the painting itself would be absent from the exhibition. It has been noted disquisitively that the number 1001 of Duchamp's entry at the 1912 Indépendants catalogue also happens to represent in the form 10.01 the integer 2 in the Golden ratio base, related to the golden section, something of much interest to the Duchamps and others of the Puteaux Group. This, of course, was by chance—and it is not known whether Duchamp was familiar enough with the mathematics of the golden ratio to have made such a connection—as it was by chance too the relation to Arabic Manuscript of One Thousand and One Nights dating back to the 14th century.