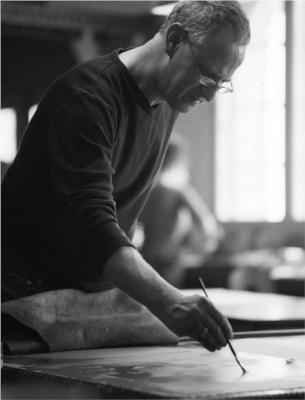 Luc Tuymans (born 1958) is a Belgian artist who lives and works in Antwerp. Tuymans is considered one of the most influential painters working today. His signature figurative paintings transform mediated film, television, and print sources into examinations of history and memory.

Tuymans was born in Mortsel near Antwerp, Belgium. Tuymans's mother's family had worked in the Dutch resistance and hid refugees. His Belgian Flemish father later revealed that two of his brothers had been in the Hitler Youth. Tuymans began his studies in the fine arts at the Sint-Lukasinstituut in Brussels in 1976. At the age of 19 Tuymans encountered a series of El Greco paintings in Budapest while working as a guard for a European railway company. Subsequently, he studied fine arts at the Ecole Nationale Supérieure des Arts Visuels de la Cambre in Brussels, Belgium (1979–1980) and at the Koninklijke Academie voor Schone Kunsten in Antwerp, Belgium (1980–1982). He abandoned painting in 1982, studying art history at the Vrije Universiteit, Brussels (1982–6), and spent three years experimenting with video and film until 1985.

Tuymans emerged in at a time when there were not many new contemporary painters making, or using imagistic paintings; others include John Currin or Elizabeth Peyton. Tuymans' subjects range from major historical events, such as the Holocaust or the politics of the Belgian Congo, to the inconsequential and banal: wallpaper patterns, Christmas decorations, everyday objects. Tuymans first made his mark in the 1980s, when he began to explore Europe's memories of World War II with harsh, elegant paintings like Gas Chamber (1986), which depicts the Dachau concentration camp. His "Heritage paintings", inspired by a mood which he perceived in the US after the Oklahoma City bombing, depict normal, almost stereotypical American imagery, for example: two baseball caps; Mount Rushmore; the image of a man working; a portrait; a birthday cake; the series also included a portrait of wealthy Ku Klux Klansman Joseph Milteer. The artist later aroused interest in 2000 with his series of political paintings titled Mwana Kitoko ("beautiful boy"), which take themes out of the state visit of King Baudouin of Belgium in the Congo in the 1950s. The works were exhibited in 2000 at the David Zwirner Gallery and the following year in the Belgian Pavilion at the Venice Biennale. The most noted painting was of the king himself in his white military uniform.

Integral to the Tuyman's practice is the reliance on existing visual materials, including drawings, photographs, and film stills. He started to use Polaroids in 1995. The artist's sparsely-colored, figurative are typically painted with fleet brush strokes of wet paint on wet paint on a modest scale and derive their subjects from pre-existing imagery which includes photographs and video stills, and often appear slightly out-of-focus. The blurriness is actually sharp because, unlike with Gerhard Richter, it is not wiped away but just painted. His paintings embrace a number of formal and conceptual oppositions, echoed in Tuymans’s own explanation that "sickness should appear in the way the painting is made," yet in "caressing the painting" there is also pleasure in its making. These statements are characteristic of Tuymans’s self-conscious and tenaciously semantic shaping of the philosophical content in his work. Tuymans often works in series, a method whereby one image can generate another and where images can be formulated and then reformulated. He continuously analyses and distils his images, making many drawings, photocopies and watercolours before making the high-intensity oil paintings. The final painting is completed in a single day. Two early series are the cycle Die Zeit (Time) (1988) about the holocaust; Heimat (German for ‘homeland’) (1996), paintings in which Tuymans sketches a wry picture of the revived self-awareness of the Flemish nationalist; and the series Passion (1999) about the essence of religious belief. Between 2007 and 2009 Tuymans worked on a triptych, which began with Les Revenants and Restoration (2007) about the power of the Jesuit Order; continued with Forever. The Management of Magic, relating to the world phenomenon Walt Disney; and ended with Against the Day (2009), a series on TV reality shows.