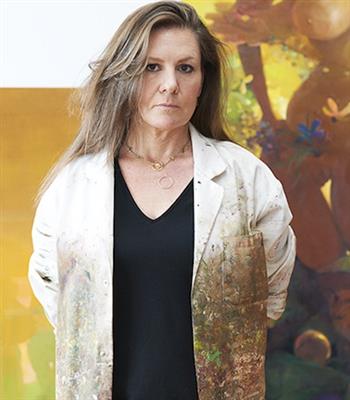 Lisa Yuskavage (1962) is an American artist who lives and works in New York City. She is known for her figure paintings, in which seemingly ignoble subjects are depicted with classic, historical techniques.


Since the early 1990s, Yuskavage has been associated with a re-emergence of the figurative in contemporary painting. Of the artist’s paintings, critic Roberta Smith has written: "The combination of mixed subliminal messages, deliciously artificial color and forthright sexuality is characteristic of Ms. Yuskavage's work, as is the journey from high to low to lower culture within a relatively seamless whole."


Yuskavage’s oeuvre is characterized by her ongoing engagement with the history of painting, and in particular the genre of the nude. Her paintings also encompass landscape and still life genres, with all three often appear within a single work. Yuskavage’s unique use of color is imbedded in Renaissance techniques as well as Color Field painting, and she cites diverse inspirations, including Italian painter Giovanni Bellini, Dutch painter Johannes Vermeer, and French painter Edgar Degas.


Theoretically, her paintings are associated with psychologically driven theories of viewing, such as that of the gaze. However, the complexities inherent in her paintings deny singular interpretation; as curator and critic Christian Viveros-Fauné explains: "Yuskavage’s oeuvre... succeeds exactly to the degree that it refuses to be pinned down to any one of its many conflicted meanings. 'I only load the gun', [Yuskavage] has been known to say to those who insist on viewing a painting as an explanation."[1]


She had a New York exhibit sell out before it opened, and one of her paintings sold at auction for more than $1 million.


In September 2015, Lisa Yuskavage: The Brood opened at the Rose Art Museum of Brandeis University in Waltham, Massachusetts. This major solo exhibition presented the artist’s work spanning 25 years. Additionally, Yuskavage is featured in the Metropolitan Museum of Art’s new online series, The Artist Project, launched in March 2015, in which she discusses Édouard Vuillard’s The Green Interior (1891).


Her work is also mentioned in the novel China Rich Girlfriend of the Crazy Rich Asians trilogy by Kevin Kwan.


In Tamara Jenkins' 2018 film Private Life, main characters Rachel (Kathryn Hahn) and Richard (Paul Giamatti) claim to be good friends with Yuskavage, whose artwork, gifted to them as a wedding present, hangs in their living room.