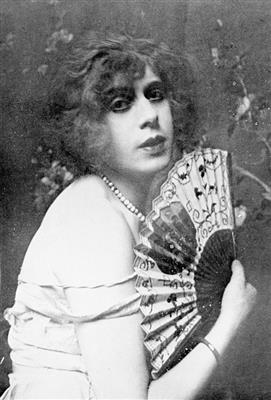 Lili Ilse Elvenes (28 December 1882 – 13 September 1931), better known as Lili Elbe, was a Danish painter and transgender woman, and among the early recipients of sex reassignment surgery. She was a successful painter under her birth name Einar Magnus Andreas Wegener. After transitioning in 1930, she changed her legal name to Lili Ilse Elvenes and stopped painting; she later adopted the surname Elbe. She died from complications following a uterus transplant. The US and UK English versions of her semi-autobiographical narrative were published posthumously in 1933 under the title Man into Woman: An Authentic Record of a Change of Sex.


It is generally believed that Elbe was born in 1882, in Vejle, Denmark. Her year of birth is sometimes stated as 1886, which appears to be from a book about her which has some facts changed to protect the identities of the persons involved. Facts about the life of her wife Gerda Gottlieb suggest that the 1882 date is correct because they married while at college in 1904, when Elbe would have been just eighteen if the 1886 date were correct.


It is speculated that Elbe was intersex, although that has been disputed. Some reports indicate that she already had rudimentary ovaries in her abdomen and may have had Klinefelter syndrome.


Elbe met Gerda Gottlieb while they were students at the Royal Danish Academy of Fine Arts in Copenhagen, and they married in 1904 when Gottlieb was 19 and Elbe was 22.


They worked as illustrators, with Elbe specialising in landscape paintings while Gottlieb illustrated books and fashion magazines.


They travelled through Italy and France before settling in 1912 in Paris, where Elbe could live more openly as a woman by posing as Gottlieb's sister-in-law. Elbe received the Neuhausens prize in 1907 and exhibited at Kunstnernes Efterårsudstilling (the Artists' Fall Exhibition), at the Vejle Art Museum in Denmark, where she remains represented, and in the Saloon and Salon d'Automne in Paris.


Elbe started dressing in women's clothes after she found she enjoyed the stockings and heels she wore to fill in for Gottlieb's model, actress Anna Larssen, who on one occasion was late for a sitting. Larssen suggested the name Lili, and by the 1920s, Elbe regularly presented with that name as a woman, attending various festivities and entertaining guests in her house. Gottlieb became famous for her paintings of beautiful women with haunting, almond-shaped eyes, dressed in chic apparel. The model for these depictions of petites femmes fatales was Elbe. Elbe stopped painting after her transition.


In 1930, Elbe went to Germany for sex reassignment surgery, which was highly experimental at the time. A series of four operations were carried out over a period of two years. The first surgery, removal of the testicles, was performed by Dr. Erwin Gohrbandt, under the supervision of sexologist Magnus Hirschfeld in Berlin. The rest of her surgeries were carried out by Kurt Warnekros, a doctor at the Dresden Municipal Women's Clinic. (The clinic was later destroyed with its records in Allied bombing raids.) The second operation was to implant an ovary onto her abdominal musculature, the third to remove the penis and the scrotum.