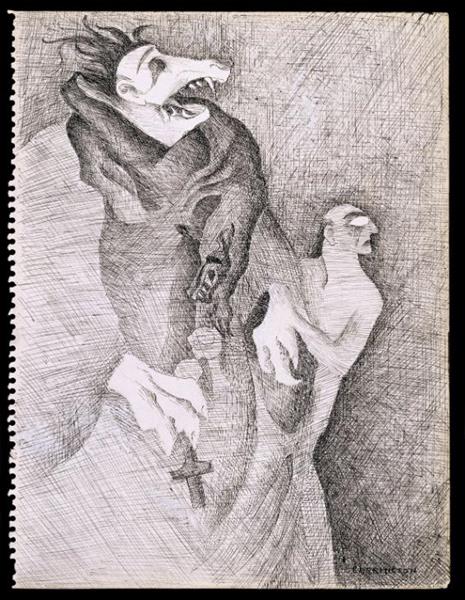 Do You Know My Aunt Eliza?

At the age of nineteen, Leonora Carrington discovered Surrealism through Herbert Read’s book on the movement (Surrealism, London 1936). She was drawn into the movement’s orbit through her relationship with Max Ernst, developing her own richly individual imagery that grew out of her childhood obsessions. In the period 1937-41, added impetus came from the tensions engendered by Ernst’s rejected wife, Marie-Berthe Aurenche, and then by his imprisonment on the declaration of war. Escaping occupied France, Carrington crossed into Spain in a state of mental collapse and eventually reached Portugal in 1941, only to encounter Ernst travelling with the American collector Peggy Guggenheim to New York.

Do you know my Aunt Eliza? includes one of Carrington’s central images: the horse. The robed and horse-headed figure with a crucifix towers over a sinister accomplice. The imagery is ambiguous, as Carrington often used the horse as a sign of dynamism and speed and sovereignty. This aspect is seen most notably in her major early painting The Inn of the Dawn Horse (1938), but also in the frozen horse in Portrait of Max Ernst (1939), whose pose, incidentally, anticipates that in Do you know my Aunt Eliza?

In Do you know my Aunt Eliza?, however, the atmosphere is darkly threatening, the horse’s eyeless gaze is matched by the blind stare of its human accomplice. In the context of the artist’s lapsed Catholicism, this image recalls the biting parody of religion found in Francisco Goya, whose bleak etchings may also be remembered in the dense hatching of this drawing.

It has been inferred, from the quality of the materials and the finish, that the ink drawings (of which I am an Amateur of Velocipedes is another), were made once Carrington had reached New York in 1941. They evidently relate closely to more hurried pencil sketches made as part of Carrington’s therapy under Dr Morales in Santander in 1940. The horse image appears in many of these with a similar ambiguity, oscillating between nightmare and self-identification. The artist relived her breakdown in the searing novel Down Below (1943), but a note to her father (that at one time accompanied the sketches) gives, with raw immediacy, a sense of the collapse: ‘It is difficult for you to imagine what very hard work it is to reconstruct a complete nervous wreck ... I think you had better know that I have been very close to lunacy’.

The question that serves as this drawing’s title is inscribed on the back. Just as with I am an Amateur of Velocipedes, it can be related to Carrington’s story Little Francis. This tells of the destructive rivalry for Uncle Ubriaco’s affection between Amelia, his daughter, and her cousin Francis. These characters thinly disguise Marie-Berthe, Ernst, and Carrington herself, the conflict that, in part at least, precipitated her breakdown. The central passages, which focuses on Francis (the Carrington figure), concern his attempts to retain Ubriaco. On being forced to move-on by the imminent arrival of Amelia, he sings ‘rather dejectedly’, while cycling:

This curious ditty goes without explanation in the text. Recalling the nursery rhymes of childhood, in which Carrington saw parallels to Surrealist concerns, it bears a sense of deeply concealed meanings. It is notable that Francis sprouts a horse’s head when Ubriaco returns to Amelia. This seems to allude to the white rocking horse that Carrington had kept in the Parisian flat she shared with Ernst, while also being a physical sign of dejection and abandonment.