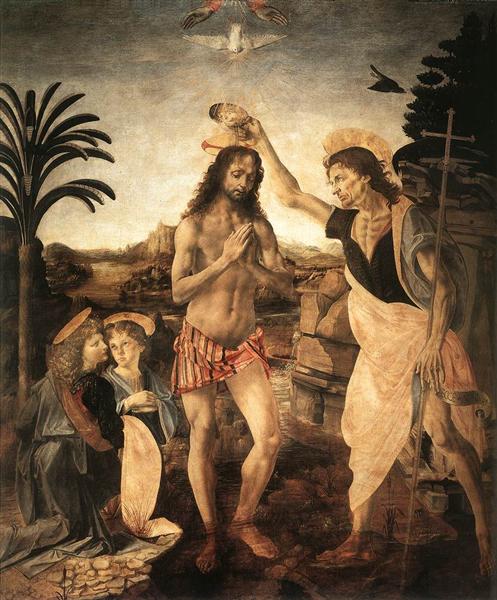 The Baptism of Christ

The Baptism of Christ is a painting finished around 1475 in the studio of the Italian Renaissance painter Andrea del Verrocchio and generally ascribed to him and his pupil Leonardo da Vinci. Some art historians discern the hands of other members of Verrocchio's workshop in the painting as well.


The picture depicts the Baptism of Jesus by John the Baptist as recorded in the Biblical Gospels of Matthew, Mark and Luke. The angel to the left is recorded as having been painted by the youthful Leonardo, a fact which has excited so much special comment and mythology, that the importance and value of the picture as a whole and within the œuvre of Verrocchio is often overlooked. Modern critics also attribute much of the landscape in the background to Leonardo da Vinci as well. The painting is housed in the Uffizi Gallery in Florence.


Andrea del Verrocchio was a sculptor, goldsmith and painter who ran a large and successful workshop in Florence in the second half of the 15th century. Among his apprentices and close associates were the painters Botticelli, Botticini, Lorenzo di Credi and Leonardo da Vinci.


Verrocchio was not himself a prolific painter and very few pictures are attributed to his hand, his fame lying chiefly in his sculptured works. Verrocchio's paintings, as are typical of Florentine works of that date, are in tempera on wooden panel. The technique of painting artworks in paint, previously used in Italy only for durable items like parade shields, was introduced to Florence by Dutch and Flemish painters and their imported works at around the date that this painting was created.


The painting The Baptism of Christ was, according to Antonio Billi (1515), commissioned by the Church of S. Salvi, and was later transferred to the Vallumbrosan Sisterhood in Santa Verdiana. In 1810 it entered the collection of the Accademia and passed to the Uffizi in 1959. In the 16th century the work was discussed in Giorgio Vasari's Lives of the Painters in the biographies of both Verrocchio and Leonardo da Vinci.


A pupil in Verrocchio's workshop, Leonardo was asked to paint an angel in his master's composition. According to Vasari, this was so impressive that Verrocchio quit painting. Leonardo also likely painted much of the background landscape; it was painted in oil, like the angel, while the rest of the painting is in tempera.