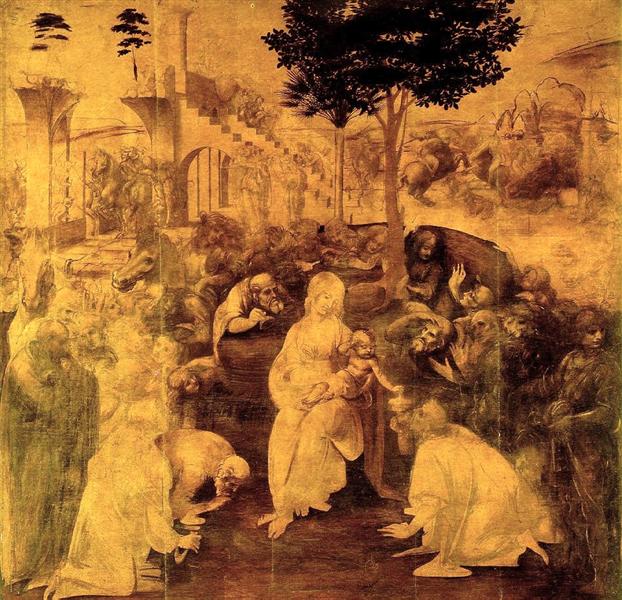 The Adoration of the Magi

The Adoration of the Magi is an early painting by Leonardo da Vinci. Leonardo was given the commission by the Augustinian monks of San Donato a Scopeto in Florence, but he departed for Milan the following year, leaving the painting unfinished. It has been in the Uffizi Gallery in Florence since 1670.

The Virgin Mary and Child are depicted in the foreground and form a triangular shape with the Magi kneeling in adoration. Behind them is a semicircle of accompanying figures, including what may be a self-portrait of the young Leonardo (on the far right). In the background on the left is the ruin of a pagan building, on which workmen can be seen, apparently repairing it. On the right are men on horseback fighting and a sketch of a rocky landscape.

The ruins are a possible reference to the Basilica of Maxentius, which, according to Medieval legend, the Romans claimed would stand until a virgin gave birth. It is supposed to have collapsed on the night of Christ's birth (in fact it was not even built until a later date). The ruins dominate a preparatory perspective drawing by Leonardo, which also includes the fighting horsemen. The palm tree in the center has associations with the Virgin Mary, partly due to the phrase "You are stately as a palm tree" from the Song of Solomon, which is believed to prefigure her. Another aspect of the palm tree can be the usage of the palm tree as a symbol of victory for ancient Rome, whereas in Christianity it is a representation of martyrdom—triumph over death—so in conclusion we can say that the palm in general represents triumph. The other tree in the painting is from the carob family, the seeds from the tree are used as a unit of measurement. They measure valuable stones and jewels. This tree and its seeds are associated with crowns, suggesting Christ as the king of kings or the Virgin as the future queen of heaven, as well as that this is nature's gift to the new born Christ. As with Michelangelo's Doni Tondo, the background is probably supposed to represent the Pagan world supplanted by the Christian world, as inaugurated by the events in the foreground.The artist uses bright colors to illuminate the figures in the foreground of the painting. Jesus and the Virgin Mary are, in fact, painted yellow, the color of light. It is also interesting how the trees are painted blue, an unusual color for trees of any kind. On the right side the most credible self-portrait of Leonardo da Vinci as a 30-year-old can be seen, according to several critics. (See Angelo Paratico )

Much of the composition of this painting was influenced by an earlier work of the Northern artist Rogier van der Weyden. The relationship between figures, space and the viewer’s standpoint, the high horizon, slightly raised viewpoint, space receding into the far distance, and a central figural group poised before a rock formation in the middle of the landscape are all copied from van der Weyden's Entombment of Christ (1460, Uffizi Gallery, Italy).