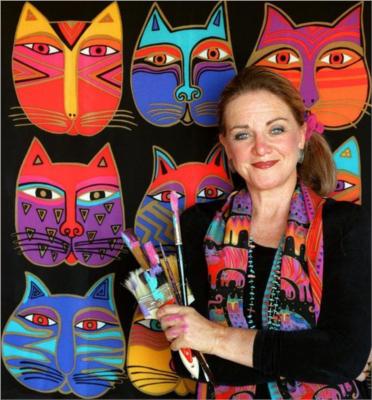 Born Laurel Anne Harte in the San Fernando Valley, California, on New Year's Eve, 1945, to parents Ann and Russell Harte. When the couple divorced, Ann supported Laurel and her sister Suzi with her work as a seamstress and designer. However, a rift grew between Laurel and her mother when Laurel was a teenager. Laurel lived for a period with her father, but the arrangement ended abruptly. Laurel supported herself by working as a cook, house cleaner and baby-sitter

When Laurel was 19 she married a jazz musician, Robert Burch. They parted after a few years together, Laurel becoming a single parent herself. With two children to care for, she supported herself by claiming welfare payments and making jewelry with occasional help from Ann. Like her mother she also made outstanding dolls and sewn art. The background to this textile gift was a curious aspect of Laurel's childhood. Her mother was seamstress and designer for the singer Peggy Lee and her daughter. Ann described a strange moment where she had spent weeks shopping for shoes, ribbons, hat, fabrics to make an Easter outfit for Peggy's daughter. She sewed all night before Easter morning and drove the beautiful outfit to Peggy's home in Beverly Hills dragging Laurel and Suzi out of bed before daybreak. As she returned to the car seeing her girls knowing they had no Easter outfits waiting for them, their hair all messy with sleep and Ann was heartbroken. One can acknowledge there was the love there and the grief of a single mum. Laurel grew up with a mixture of love and loss, but also with a keen brilliant artistic eye from her parents.

Burch went on to launch her business, now called Laurel Burch Artworks, in February 24, 1960. She began making paintings and was commissioned by restaurants, businesses and private collectors. "I found metal in a junkyard and hammered it out on the back of an old frying pan", she stated during an interview with the Marin Independent Journal in 2005.

She began making jewelry and selling it on the streets of San Francisco from tackle boxes. Some local stores began stocking her creations, and a businessman, Shashi Singapuri, took samples of her work to China. She went to China in 1971 and discovered cloisonné, a kind of enamel work, with which she designed paintings and had the designs made into earrings.

With Mr. Singapuri's financial backing manufacturing began. Burch went on to work on cast metals and wood, and to include spinoff products on paper, porcelain and fabric. In 1979 she split with Singapuri, and started Laurel Burch Inc. She was president and chief designer. In the 1990s she licensed her designs to a dozen or so companies that now make and distribute her creations worldwide.

She supported her mother through the last years of her life in a nursing home near Carmel California.