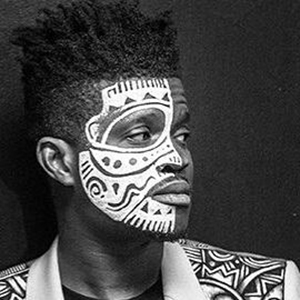 
Senbanjo was born and raised in Ilorin, Nigeria by Yoruba parents. His father was a lawyer, his mother was a nurse. He grew up performing in his church's choir. While in school he had a music group called Light and Fire which performed original songs and covers.


Senbanjo studied law at Nigeria's University of Ilorin and, despite wanting to drop out during his second year of law school, received his degree in 2005. He then worked as a human rights lawyer for five years, spending his final three years working at the National Human Rights Commission as a senior legal officer focusing on women and children's rights. Senbanjo travelled to different parts of Northern Nigeria visiting schools and villages to educate men and women about why children should be in school.


"I knew if I pursued a career in the arts, I'd have to live with the fact that some people in my hometown might never talk to me again," said Senbanjo in an interview with 99U. Despite this, in 2010 Senbanjo quit his job as a lawyer and started the Laolu Senbanjo Art Gallery in Abuja, Nigeria.


Senbanjo moved to Brooklyn, NY in August 2013 to pursue his art career.


Senbanjo has coined his style of art, Afromysterics, meaning mystery of the African thought pattern. It incorporates African themes and African traditions. His uses charcoal and distinct patterns to create complex, story-rich art designs that draw heavily on his Yoruba heritage and feature ancient Nigerian symbols and patterns. Senbanjo says his Nigerian roots are a major source for his visual inspiration. Though his visual references have been described as sharing "affinities with Jean-Michel Basquiat and Keith Haring".


He has had commissions from, and formed partnerships with, celebrities and brand titans including Nike, Beyoncé's album Lemonade, the Grammy Museum, and the Smithsonian Institution. He has also partnered with Danielle Brooks (who plays Tasha Jefferson on the Netflix series Orange Is the New Black). In June 2015, Senbanjo's new mantra became "everything is my canvas" and he began painting on everything from shoes, to jackets, to people. He created the Sacred Art of the Ori Ritual, which he describes and explains in a September 11, 2017, TED talk.


Senbanjo and his Sacred Art of the Ori Ritual has been featured in various music videos, including:


Senbanjo has been invited to collaborate with several brands, including:


Senbanjo is a world music artist who draws influences from Fela Kuti, Sade (singer), Bob Marley, and King Sunny Adé. His musical style is deeply rooted in the traditions of Afrobeat and High Life, mixed with Afro-Soul and Reggae. Senbanjo blends singing in his native Yoruba language and often translates Yoruba folks songs, proverbs and his oriki into English.