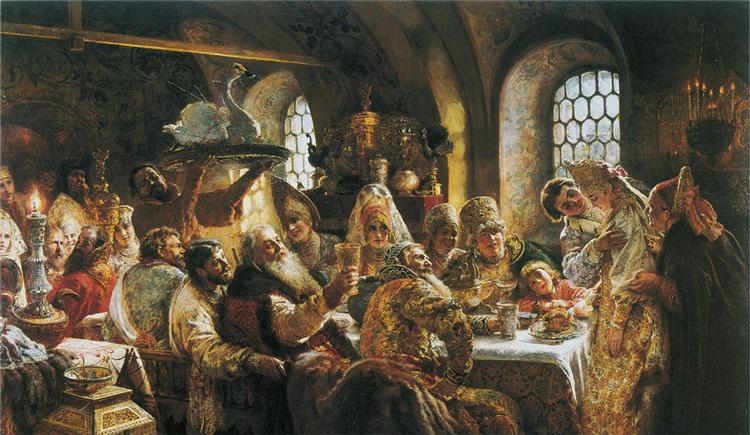 A Boyar Wedding Feast was painted in 1883 by Russian artist Konstantin Makovsky (1839–1915). The painting shows a toast at a wedding feast following a boyar marriage, where the bride and the groom are expected to kiss each other. The bride looks sad and reluctant, while the elderly attendant standing behind her encourages the bride to kiss the groom. The work won a gold medal at the World’s Fair held in Antwerp, Belgium in 1885, and is considered to be one of Makovsky’s most popular works.

Konstantin Makovsky was a Russian realist painter who opposed academic restrictions. His paintings venerate Russia's old world customs. A Boyar Wedding Feast is painted as a scene from the seventeenth-century – depicting the old way of Russian life, bringing back memories of the cherished past.

A Boyar Wedding Feast is an oil on canvas painting measuring 93 in × 154 in (240 cm × 390 cm), set in either the 16th or 17th century, in which a room of guests are depicted toasting a newlywed couple. A traditionally offered boyar wedding toast is meant to encourage the first kiss to make the wine sweeter. The couple stands at the head of the table (right), where the groom presents his bride to the wedding guests and sees her without her veil for the first time. She appears timid and bashful as the men toast for the first kiss. To the right of the couple, the "Lady of Ceremony" gently urges on the bride.

Makovsky’s depiction of the wedding, an important social event of 16th and 17th century boyar life, is dramatically lit. The guests are depicted at the table with food and drink served on silverware in front of them. A roasted swan is being brought in on a large platter, the last dish served before the couple retire into the bedroom. Luxurious details such as silver cups, richly embroidered garments, and an ivory chest with a silver bowl in the foreground are depicted. The bride and the other women are wearing pearl-studded kokoshniki, a Russian woman’s headdress.

Winning the 1885 medal of honor at the Exposition Universelle d'Anvers (2 May – 2 November 1885), A Boyar Wedding Feast was purchased by American jeweler and art collector Charles William Schumann in August 1885 for $15,000 (or £10,000). Schumann reportedly outbid Alexander III of Russia to obtain the work. The painting was auctioned as part of Schumann’s estate on 23 January 1936 and sold for $2,500. Sometime after the sale, A Boyar Wedding Feast entered the collection of Robert Ripley, creator of Ripley's Believe It or Not!. It was sold during his estate sale on 26 August 1949 for $2,200. The painting was again offered for sale on 18 December 1968. Between 1968 and 1973, the painting was acquired by Marjorie Merriweather Post. Upon her death in 1973, the Hillwood Estate, Museum & Gardens was founded by Post's estate, and A Boyar Wedding Feast was donated to the collection.