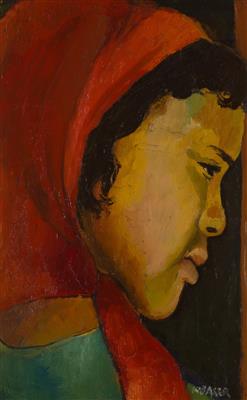 An impressionist in style and inclination, Kenneth Baker always filled his work with people he could relate to, and characters he understood intimately. Painted with the utmost compassion, the working class subjects of his paintings became real people with real problems, often unable to extricate themselves from the vicious cycle of poverty, despair and degradation.

Baker was a self-taught artist and found inspiration in the work of Gregoire Boonzaier in terms of style and subject matter. Before commencing a career as a full-time artist, Baker worked as a sign writer in the Cape Town docks, where he immersed himself in the lives of the fisher folk. The accurate and poignant depictions of harbour scenes, and fishermen handling or selling their catches became a consistent theme throughout his oeuvre.

District Six’s vibrancy and its characters provided Baker with the most suitable subject matter in terms of atmosphere and emotional content. Baker’s family was forcibly removed from the Claremont area under the Group Areas Act of the 1960s, and he could intuitively capture and communicate the emotional impact of despair, desperation and grief, that typified life in the fateful history of District Six. In Baker’s paintings, the District Six buildings and houses became much more than just that – they were transformed into harbingers of their fate, and the impending doom and crisis awaiting those who lived their lives in them.

Working as a coloured professional artist, Baker struggled to support his family under the discriminatory laws of Apartheid. His paintings were usually under-priced to ensure a sale, although he also liked the idea that it made his work more accessible to people who would otherwise not be able to afford it. The underlying tragedy in Baker’s compassionate paintings – groups of friends drinking and partying in an effort to find temporary solace and comfort from their pain and problems through alcohol – also became his tragedy, and in the end, subject and artist became one.


Kenneth, as he is better known, was born at Harfield Road, Claremont, Cape Town, South Africa, which was, at the time of his birth, a predominantly working class suburb.


It appears that he received very few years of formal schooling, and was self-taught as an artist, but was encouraged by his father, who earned his living as a house painter. Kenneth grew up under the pall of South African apartheid. His suburb of birth was a target of the government of the time's policy of forced removals, where thousands of families were relocated to other areas, based on racial segregation. Baker's family was amongst those moved.


Kenneth married Joan, a storyteller, and they had four children. Joan describes the tension between the economic demands of raising a family and his desire to be a full-time artist. One of his earlier known employments was as a sign-writer in the Cape docks, a setting where he undoubtedly received some inspiration for the subjects of his paintings.


He enjoyed some renown during his life, holding one-man and group exhibitions, but sold his work at relatively low prices, enjoying the fact that this made it more accessible. Since Kenneth died in 1996, his works have been attracting increasing interest, and he appears in many Cape art collections.


His style, is described as impressionist and expressionist. He painted landscapes, city scenes, figures and still lifes. His work has an evocative simplicity, and often touches themes such as poverty and everyday pleasures. He painted many street scenes of life in District Six, a once vibrant and colourful suburb that was eventually demolished by the authorities as the final stage of another forced removal. Baker is recognised as one of the relative few who captured something of the spirit of District Six in a creative medium.


Further information, and examples of his work can be seen at: