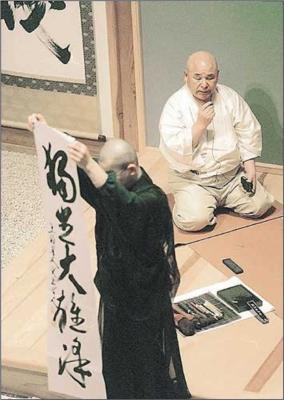 Keidō Fukushima (福島 慶道, Rōmaji: Fukushima Keidō, March 1, 1933 – March 1, 2011) was a Japanese Rinzai Zen master, head abbot of Tōfuku-ji (one of the main branches of the Rinzai sect), centered in Kyoto, Japan. Because of openness to teaching Western students, he had considerable influence on the development of Rinzai Zen practice in the West.

Fukushima became an acolyte monk at the age of thirteen under his original teacher Kidō Okada, abbot of Hōfuku-ji monastery in Okayama, Japan. Fukushima graduated from Otani University’s Department of Buddhist Studies in 1956, following completion of Otani’s doctoral course. In 1961 he began monastic training with Zenkei Shibayama at Nanzen-ji Monastery in Kyoto. Fukushima’s main teacher, Zenkei Shibayama, was instrumental in helping to transplant Rinzai Zen to the West. He was one of the first Rinzai Zen masters to hold retreats in the United States, and to publish books in English: A Flower Does Not Talk, Ox-herding Pictures, and Zen Comments on the Mumonkan / Gateless Barrier. Shibayama made annual visits to the United States in the late 1960s. In 1969 he was accompanied by Fukushima (at that time senior monk at Nanzen-ji and known as Genshō). In 1973 Fukushima received a fellowship to study English at the Claremont Colleges where he conducted seminars on Zen and led zazen practice.

Acknowledged as a Zen master in 1974, Fukushima was appointed vice-resident abbot of Hōfuku-ji where he began to train his own disciples. In 1980, he was appointed master of the Tōfuku-ji training monastery (senmon dōjō 専門道場) in Kyoto. He was elected head abbot (kanchō 管長) of Tōfuku-ji in 1991, supervising 363 affiliated temples.

Fukushima also worked to raise awareness and funds to revive and reconstruct several of China's important historical monasteries, thereby aiding Chán's emergence from the Cultural Revolution's devastating effects. Jōshū's monastery at Zhao Zhou, now known as Bailin, was the first of these efforts to achieve official government support. On later trips, Fukushima and other priests provided assistance for the rebuilding of Manjuji (萬寿寺) on Mt. Kinzan (径山), of particular importance to the Tōfuku-ji tradition since the founder Enni Ben’en (also known as Shōichi Kokushi) trained there between 1235 and 1241.

Well known for his calligraphy, Fukushima was an authority on reading classical Chinese and Kanbun (a hybrid Chinese/Japanese script). Although many Buddhist priests produce religiously inspired art, they rarely create their works in front of an audience. Fukushima realized the very act of doing calligraphy could exert educational and inspirational influence upon those who witnessed it. In keeping with Japanese conventions, he did not give calligraphy demonstrations for Japanese audiences, but he did incorporate such events among his overseas teaching activities.