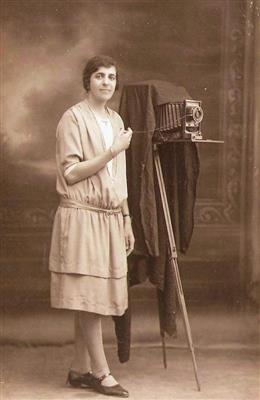 Karimeh Abbud (18 November 1893 – 27 April 1940; Arabic: كريمة عبّود‎), was a Palestinian professional photographer and artist who lived and worked in Palestine in the first half of the twentieth century. She was one of the first woman photographers in the Arab World.


In 1893, the year she was born, her father Said Abbud, was working as a teacher in Bethlehem. At the turn of the century, he became pastor of the Lutheran church for the following five decades. Karimeh was the second of six children.


It was in Bethlehem, in 1913 that she first began to take an interest in photography, after receiving a camera from her father as a gift for her 17th birthday. Her first photos are of family, friends and the landscape in Bethlehem and her first signed picture is dated October 1919.


Karimeh studied Arabic literature at the American University of Beirut in Lebanon. During this time, she took a trip to Baalbek to photograph archaeological sites there. She set up a home studio, earning money by taking photos of women and children, weddings and other ceremonies. She also took numerous photos of public spaces in Haifa, Nazareth, Bethlehem and Tiberias.


By the 1930s she was a professional photographer, rising to prominence in Nazareth, where the Abbud family was well known as her grandfather had served as the senior pharmacist at the Nazareth English Hospital and her father had also served as a pastor there. When local Nazareth photographer Fadil Saba moved to Haifa, Karimeh's studio work was in high demand for weddings and portraits in particular. The work she produced in this period was stamped in Arabic and English with the words: "Karimeh Abbud - Lady Photographer - كريمة عبود: مصورة شمس". In the mid-1930s, she began offering hand-painted copies of studio photographs.


Original copies of her extensive portfolio have been collected together by Ahmed Mrowat, Director of the Nazareth Archives Project. In 2006, Boki Boazz, an Israeli antiquities collector, discovered over 400 original prints of Abbud's in a home in the Qatamon quarter of Jerusalem that had been abandoned by its owners fleeing the Israeli occupation in 1948. Mrowat has expanded his collection by purchasing the photos from Boazz, many of which are signed by the artist.


On November 18, 2016, Google dedicated a Doodle to the photographer for the 123rd anniversary of her birth. The Doodle reached all the countries of the Arab World.