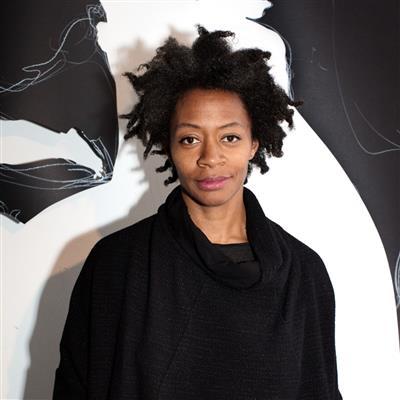 Kara Elizabeth Walker (born November 26, 1969) is an American contemporary painter, silhouettist, print-maker, installation artist, filmmaker, and professor who explores race, gender, sexuality, violence, and identity in her work. She is best known for her room-size tableaux of black cut-paper silhouettes. Walker has been the Tepper Chair in Visual Arts at the Mason Gross School of the Arts, Rutgers University since 2015.


Walker was born in Stockton, California, in 1969. She lived with her father, Larry Walker (b. 1935), who worked as a painter and professor. Kara's mom Gwendolyn worked as an administrative assistant. Reflecting on her father's influence, Walker recalls: "One of my earliest memories involves sitting on my dad's lap in his studio in the garage of our house and watching him draw. I remember thinking: 'I want to do that, too,' and I pretty much decided then and there at age 2½ or 3 that I was an artist just like Dad."


Walker's family moved to Atlanta, where her father took on a position at Georgia State University. The family settled in Stone Mountain.


Walker received her BFA from the Atlanta College of Art in 1991 and her MFA from the Rhode Island School of Design in 1994. Walker found herself uncomfortable and afraid to address race within her art during her early college years. However, she found her voice on this topic while attending Rhode Island School of Design for her Master's, where she began introducing race into her art. She had a distinct worry that having race as the nucleus of her content would be received as "typical" or "obvious."


According to The New York Times art critic Holland Cotter, "Nothing about [Walker's] very early life would seem to have predestined her for this task. Born in 1969, she grew up in an integrated California suburb, part of a generation for whom the uplift and fervor of the civil rights movement and the want-it-now anger of Black Power were yesterday's news." Walker moved to her father's native Georgia at the age of 13, when he accepted a position at Georgia State University. This was a culture shock for the young artist: "In sharp contrast with the widespread multi-cultural environment Walker had enjoyed in coastal California, Stone Mountain still held Ku Klux Klan rallies. At her new high school, Walker recalls, "I was called a 'nigger', told I looked like a monkey, accused (I didn't know it was an accusation) of being a 'Yankee.'"


Walker is best known for her panoramic friezes of cut-paper silhouettes, usually black figures against a white wall, which address the history of American slavery and racism through violent and unsettling imagery. She has also produced works in gouache, watercolor, video animation, shadow puppets, "magic-lantern" projections, as well as large-scale sculptural installations like her ambitious public exhibition with Creative Time called A Subtlety (2014). The black and white silhouettes confront the realities of history, while also using the stereotypes from the era of slavery to relate to persistent modern-day concerns. Her exploration of American racism can be applied to other countries and cultures regarding relations between race and gender, and reminds us of the power of art to defy conventions.