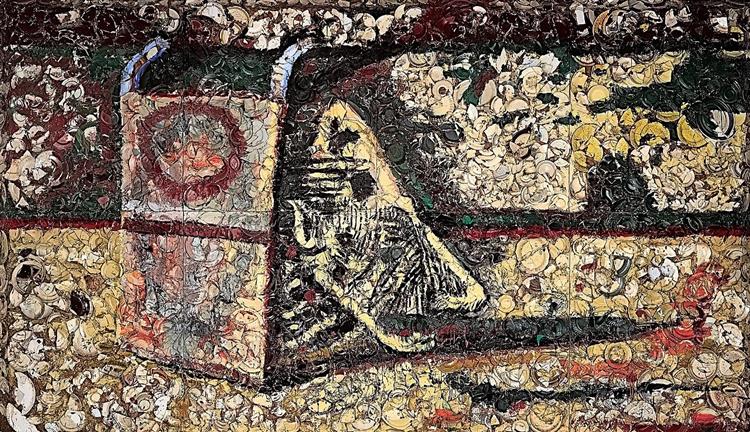 Julian Schnabel is best known for his 'plate paintings', like Spain (1986). Spain and other plate paintings from the period, such as The Red Sky (1984) and Australia (1986), were created from broken dishes, thick layers of oil paint and Bondo - a type of putty used for automotive and household repairs. These stood in contrast to Minimal and Conceptual art, the prevailing trends of the 1960s and 1970s. Scholars have categorized Schnabel as a Neo-expressionist (a term that the artist does not wholly identify with), and one of the significant figures in the 1980s revival of the traditional mediums of painting and sculpture. At the same time, Schnabel did not conform to painting conventions: he was experimental in his approach and use of unconventional materials and techniques. It is evident in his 1980s plate paintings, and it remains a significant component of his work throughout his career. This approach can also be linked to earlier trends in the Post-Minimalist sculpture and the works of early 1970s abstract artists, such as Alan Shields and Harmony Hammond.

In 'plate paintings', such as Spain, Schnabel built on the legacy of Abstract Expressionism, the art movement that developed after World War II. The overall effect of the thick impasto and the sculptural surfaces in Spain is similar to the expressive brushstrokes and splatters of Jackson Pollock’s paintings Mural on Indian red ground (1950) and Number 25 (1950). Schnabel also combined other sources of inspiration for his 1980s 'plate paintings' like cubist forms of Pablo Picasso and cultural artifacts found in Mexico. Another essential characteristic of the 'plate paintings' is their monumental size; Spain, for instance, stands at 333x513 cm, overwhelming the viewer.

Spain is representative of Schnabel’s fascination with the country and its culture. It was inspired by the artist’s 1987 visit to Barcelona, especially by the architecture of Antonio Gaudí, whose structures are an integral part of the city’s identity. The texture created by the broken plates is reminiscent of the mosaic elements in Gaudí’s Casa Milà and Park Güell. In 'plate paintings' like Spain, Schnabel transformed the surface of the artwork: the jagged edges of broken plates and cups bulge out to create a unique kind of texture, similar to a low relief. The central motif in the painting appears to be a severed head, which is a recurrent theme in Schnabel’s work. The head seems to be situated in a bullfighting ring, located behind a burladero - a barrier used by bullfighters for protection from the bull. The snout-like face can belong either to a bull or a bullfighter, making the scene somewhat ambiguous and unclear. Schnabel selected a warm palette of earthy tones of reds and ochres, mixed with dark tones that mark long shadows. The color scheme could be a reference to a Spanish landscape, or it might symbolize the colors of the Spanish national flag.