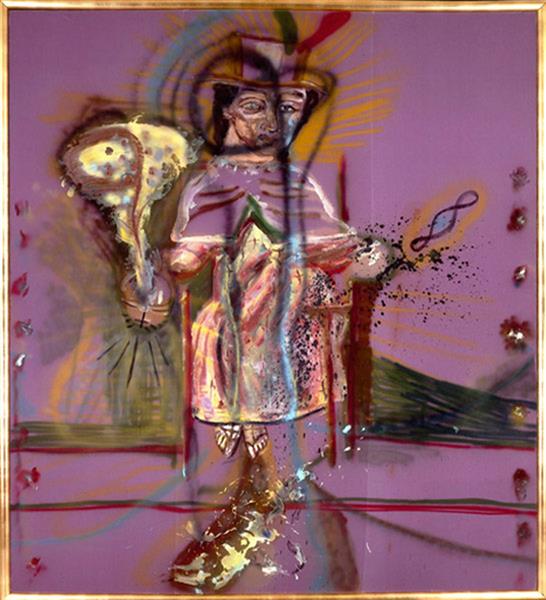 Resurrection: Albert Finney Meets Malcolm Lowry (1984) was inspired by the 1984 John Huston film rendition of Malcolm Lowry’s novel Under the Volcano. The movie starred Albert Finney as Geoffrey Firmin, an alcoholic British consul in the Mexican town of Quanhnahuac on Día de Muertos (the Mexican holiday Day of the Dead). Schnabel often connected his painting to the world of cinema, referencing films, actors, and directors in his titles: Pool Painting (for Norma Desmond) (1975), Untitled (Brando) (2008), and Last Diary Entry (For Roman Polanski) (2010).

Schnabel’s painting depicts El Ninõ de Atocha, the Roman Catholic image of Child Christ, which is famous throughout Spanish speaking countries like Mexico. The artist painted the traditional attributes of El Ninõ de Atocha - the halo, the pilgrim’s cloak, and the staff. In the backdrop, Schnabel painted a crude landscape that creates the effect of a levitating figure. The artist’s interest in Catholic iconography, especially the one connected to Mexican culture, is prominent in many of his paintings. At the age of 13, Schnabel and his family moved to the border town of Brownsville, Texas. There he became familiar with Mexican culture; later, as an adult, he often traveled to Mexico. Schnabel’s familiarity with Mexican culture and folk art is evident in Resurrection: Albert Finney Meets Malcolm Lowry. He echoes religious imagery of Mexican folk art: retablo, a small devotional painting that serves as a votive offering, and milagros, a religious folk charm used for votive offering or healing purposes.

Schnabel may have been drawn to religious imagery because he seeked to channel spirituality and mysticism. In Resurrection: Albert Finney Meets Malcolm Lowry he channeled elements of Mexican devotional folk art into creating a contemporary spiritual image. His paintings are imaginary encounters between personalities that could not meet in real life like Malcolm Lowry and Albert Finney, and Malik Joyeux and Bernardo Bertolucci in Painting for Malik Joyeux and Bernardo Bertolucci (V) (2006). Although many of Schnabel’s paintings feature Catholic iconography, the artist explored a variety of religious concepts in his art, for example, Fakires (1993) referenced Sufi mysticism and Untitled (Shiva) (2007) is one of several paintings dedicated to the Hindu god Shiva.

In Resurrection: Albert Finney Meets Malcolm Lowry, Schnabel depicts a traditional religious subject combining several modernist styles of painting. The face is reminiscent of Pablo Picasso’s portraits, the splatter technique is suggestive of Jackson Pollock, and spray-painted lines allude to Dan Christensen’s abstract paintings. Schnabel also continued to experiment with unconventional materials by executing the painting on purple velvet. The artist demonstrated his creativity and innovation by integrating traditional subject matter, modernist style, and use of unconventional materials. In the painting, he pays tribute to the artistic encounter between Lowry’s literary creation and Albert Finney’s performance in the medium of cinema. In a sense, Schnabel continues the dialogue between different mediums by giving a visual interpretation of Under the Volcano.