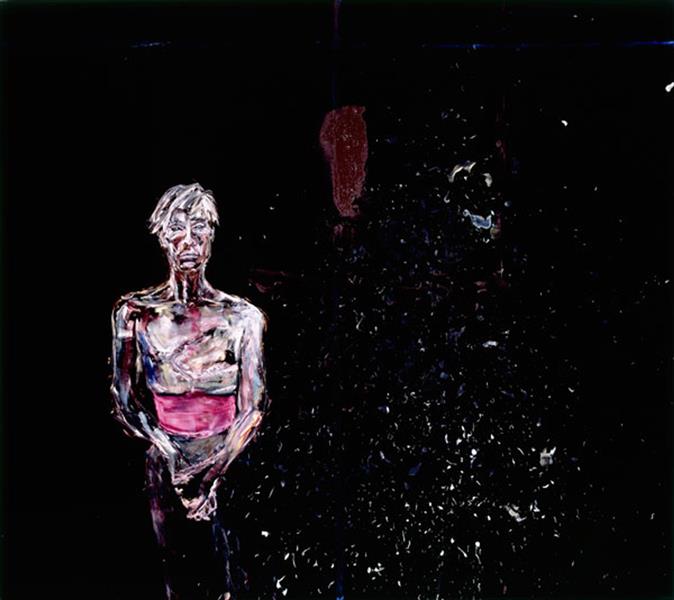 In Portrait of Andy Warhol (1982), Julian Schnabel presented an eerie image of the Pop artist and cultural icon Andy Warhol. In the 1980s, Warhol developed friendships with a younger generation of artists, which were considered part of the Neo-expressionist movement. Among them were Jean-Michel Basquiat, David Salle, and Julian Schnabel. The friendship between Warhol and Schnabel resulted in an artistic exchange. The same year Schnabel painted Portrait of Andy Warhol (1982), Warhol reciprocated by creating Julian Schnabel (1982). Most of Schnabel’s portraits were done from real life and executed without preliminary drawings. This portrait was no exception, as Warhol sat for Schnabel a few times until he completed the painting. Schnabel portrayed a thin and fragile Warhol, who appears to be in a weak state, almost like a ghost; he seems to dematerialize in front of the viewer. Warhol is depicted shirtless wearing a supporting garment around his waist, marked with pink brushstrokes. The supporting device was due to 1968 attempted the murder of Warhol by radical feminist Valerie Solanas. This left a profound impact on Warhol, who was deeply traumatized by the incident.

Schnabel continued his use of unconventional materials by choosing to paint on black velvet. The shiny quality of the velvet allows the color palette of light tones, yellows, grays, and pinks to stand out. In Schnabel’s art, the use of unconventional materials is an essential element: whether its broken plates, velvet, or fur, they all produce pictorial and psychological effects. When the viewers notice the everyday object incorporated in the paintings, they have the memory and association of the object’s everyday use and function.

Scholars have pointed out how Schnabel subtly references different artists in the portrait’s color palette, style, and atmosphere. For instance, Warhol’s vulnerable presence and wiry figure evoke a similar mood as the figures of the saints painted by Spanish Renaissance artist El Greco. Schnabel possibly wanted to provoke religious connotations since many of his works feature Catholic iconography and themes. The painting has a sense of mystery that can be interpreted as a mystic or spiritual quality. In the same way, the colors and dark mood can be associated with the portraits of Expressionist painter Francis Bacon, like Study for a Portrait I (After the life mask of William Blake)[/url] (1955) and Man in Blue VII (1954).

The artist chose to place Warhol on the left side of the canvas, allowing different elements to play out on the other side of the painting. Schnabel fills the right side of the canvas with white dots and small strokes of blue and yellow. At the center of the painting, there is a mark of brown paint - this type of biomorphic shape will become frequent in Schnabel’s later paintings. The dark background may represent a movie theater, and the specks of color are glittering dust coming from the light of the film projector.